After Komen funding controversy, many turn to other foundations 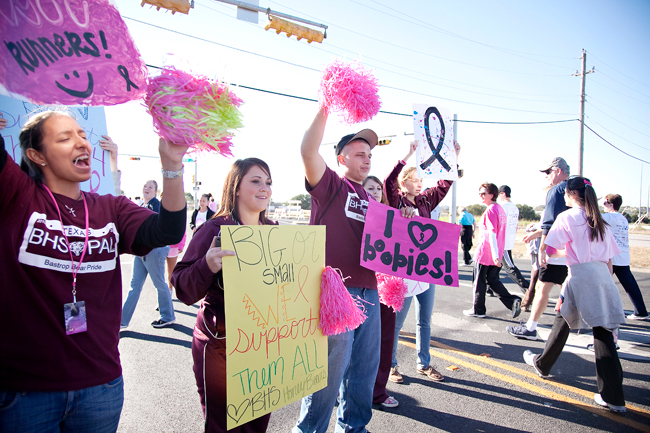 Supporters cheer on participants of the Race for a Cure run put on by the Susan G. Komen foundation, in 2010. The foundations recent decision to discontinue funding for Planned Parenthood has pushed many Austinites to look for different organizations to handle their donations (File Photo from November 8, 2010).

UT students and Austin residents who no longer want to support the Susan G. Komen Foundation can redirect their support to several local organizations after Komen made the decision to refund Planned Parenthood.

Sarah Wheat, co-CEO of Austin’s Planned Parenthood, said representatives of the Susan G. Komen Foundation originally chose to stop funding Planned Parenthood in early January because the health care organization is under a federal investigation led by congressman Cliff Stearns, chair of the U.S. House investigative committee. Representatives of the foundation announced that it would no longer fund organizations under state, local or federal investigations.

“Planned Parenthood in Austin has worked with the Komen Foundation for six years and we were notified of their decision [to revoke funding] this past month,” Wheat said.

She said the media began to report the decision on Jan. 30 after numerous abortion rights groups spoke out against the new Komen Foundation policy. By Feb. 3, representatives of the foundation chose to reinstate funding for Planned Parenthood.

Matthew Fredrickson, engineering senior and president of UT Colleges Against Cancer and cancer survivor, said he supports the Texas 4000, which is put on by and contributes to Livestrong and can be a substitute organization for Austin residents who no longer wish to endorse the Komen Foundation.

Frederickson, a cancer survivor, also said he is chairing the UT Relay for Life that will take place on April 21.

“We are expecting to have at least 600 people attend, and our goal is to raise $50,000,” Fredrickson said. “Relay for Life funds go to the American Cancer Society which funds general cancer causes like research, education, advocacy and services.”

“[In the Relay for Life] students organize teams which walk for twelve consecutive hours around a track,” Matyas said. “The relay takes place from sunset to sunrise and each team always has a representative walking on the track.”

“It’s a really moving experience, in which you remember the survivors and victims of cancer,” Matyas said. “We want to become something that is university-wide.”

She also said current members of Colleges Against Cancer are interested in becoming more involved in cancer awareness organizations across Austin.

“We are looking to expand and integrate ourselves into more organizations and services that are involved in the fight against cancer,” Matyas said.

She said students who are interested in advocating awareness for breast cancer specifically should consider purchasing pink t-shirts through ColorCancer. Each shirt color corresponds to a different type of cancer, and students can form teams or buy the shirts individually in order to support the fight against cancer, said Matyas.

Printed on, February 7, 2012 as: Students fight cancer without Komen