“Billion Dollar Movie” is a bizarre movie for a bizarre audience 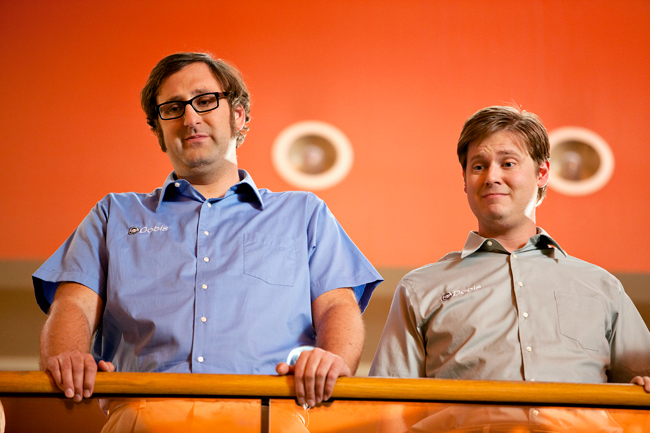 If you’ve ever taken the time to watch “Tim and Eric Awesome Show, Great Job!,” a comedy sketch show featured on Cartoon Network’s Adult Swim, then you are familiar with the bizarre antics of cult comics Tim Heidecker and Eric Wareheim.

The pair just came out with their first film, “Tim and Eric’s Billion Dollar Movie.” In the film, Tim and Eric are indebted to a gangster after blowing his billion dollars on a three-minute movie and decide to earn back the money by renovating a decrepit shopping mall.

“Billion Dollar Movie,” which is available for download on YouTube, is a mix of everything that’s awkward and isn’t intended for everyone, specifically children or any person offended by grown men holding up women and children to shield themselves from bullets. The sets look like they came straight out of a cheap ’90s movie and are filled with uncomfortable facial close-ups of characters. It seems the pair has an unusual urge to constantly make everything ordinary seem ridiculous.

Starring and directed by the comics, “Tim and Eric’s Billion Dollar Movie” is scene by scene exactly what you would expect if you were an avid Tim and Eric enthusiast, except long and drawn-out. The entire movie is filled with awkward pauses and inappropriate behavior which makes you ask yourself, “are they allowed to put this on TV?” Among many vulgar scenes in the movie, a Prince Albert piercing on a fake, rubbery male member is a modest example of content pushing the boundaries of an “R” rating.

Unfortunately, prolonging their short clips from “Tim and Eric Awesome Show, Great Job” into a 94-minute movie has its downfalls, with scenes that seemed to drag on and moments that the film could have done without. There are moments of silence that last forever and an extremely troubling act against Eric by a character called the Shrim who decides Eric’s spiritual healing should be done in a tub with children defecating on him.

During the first few scenes, Tim and Eric have long-haired wigs, fake tans and for some odd reason, Eric has a stringy goatee with a diamond imbedded in the center; the two normally look like they work a desk job at the local computer store with button down shirts tucked into khakis. This is probably the least strange thing about the entire movie, since it eventually ends with Tim covered in feces.

The two comics are known for using run-of-the-mill actors to heighten and bring authenticity to the humor. But actor/comedians such as Will Ferrell, John C. Reilly and Zach Galifianakis are often featured in their clips and have significant roles in “Tim and Eric’s Billion Dollar Movie.” The trio certainly devoted themselves to the roles they were given, bringing about a few good laughs and proving more neurotic than the already deranged main characters.

Although some think the two are too crude and disrepsectful of just about everything, Tim and Eric are funny. They know how to make people laugh and aren’t worried about offending anyone. According to EW.com, the duo was surprised that more people didn’t walk out at their Sundance premiere.

On Wednesday, “Tim and Eric’s Billion Dollar Movie” will be showing at Alamo Drafthouse on South Lamar and the pair will be there for the screening. Die hard fans: The show is sold out, so find another way to score some tickets.

However, if you don’t find any delight in diarrhea jokes, this is hands down one of the worst movies to go out and spend your money on. Any appreciation for this exhausting movie is reserved for long-time viewers or cult comic aficionados. Surely, after a few drinks the movie could become much more clear — in an unclear kind of way.