Hoagland in line for another productive season 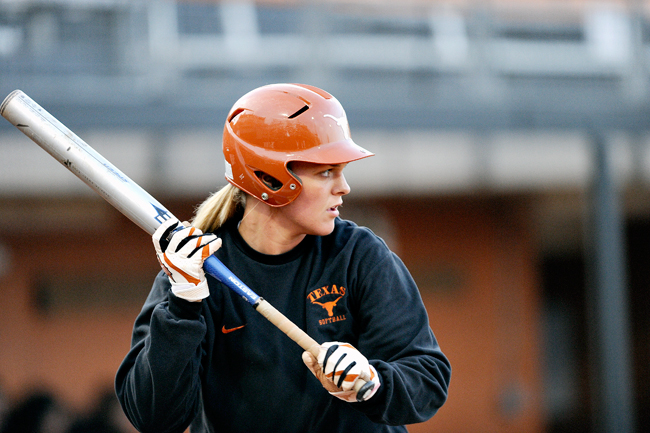 Hoagland squares around to bunt during practice Wednesday afternoon. Shell be one of eight upperclassmen for Texas in 2012.

While most athletes hit the gym and dive into personal workouts and unofficial team workouts in the offseason, Taylor Hoagland did something a bit different this past fall. Last summer the junior outfielder earned a roster spot on the USA National Softball team and spent several months touring the country and the world. After spending her offseason wearing red, white and blue, Hoagland is ready to be back in burnt orange. “I am so ready to just start playing,” Hoagland said. “I’m counting down.”

Hoagland is expected to pick up where she left off last spring and guide a potentially explosive offense through the 2012 season. Last year Hoagland started in all 56 games for Texas and posted an impressive .335 batting average. She led the team with 15 home runs and 54 runs scored and contributed further with 36 RBIs. “She’s just an amazing athlete, she’s an amazing package,” said Texas head coach Connie Clark of Hoagland’s performance with the Longhorns. “She’s a great student and a super young lady.”

Hoagland hopes that what she learned last summer will help the Longhorns back home as they begin their season tonight.

“I think the biggest thing I learned was role-playing, teamwork and having one common goal to work towards the entire season,” Hoagland said.

In the championship game of the World Cup of Softball, Hoagland came up with a clutch home run to push the USA team past Japan to win the tournament. Her shining moment came after a long stretch where Hoagland didn’t see much playing time with the national team, but she was still happy to be there.

“It didn’t matter what position or role you had on the team, you were all there to win,” Hoagland said. “I think that’s great to bring back [home] because we are so young.”

Because of her efforts the last two seasons and her work on the USA national team, Hoagland was named to the watch list for the USA National Softball Player of the Year award, which is awarded by the Amateur Softball Association of America each year. “[They’re] great achievements but you just got to keep going on, it never stops,” Hoagland said.

“And when it does you just got to get back on the horse and get back to it.”

Printed on Thursday, February 9, 2012 as: Hoagland brings leadership, experience to this year's team