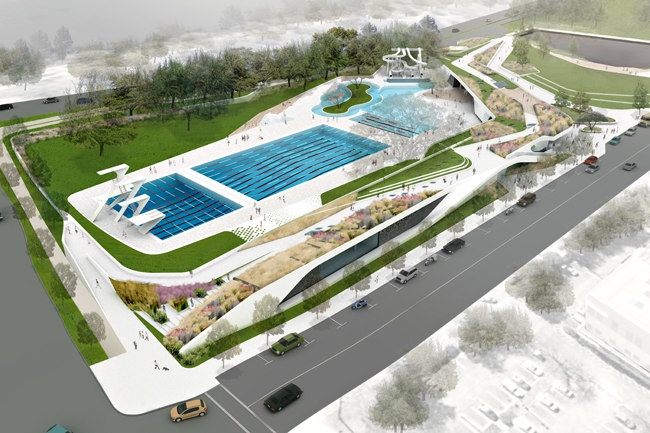 The YMCA of Austin has proposed the building of a 40-acre recreational aquatics center downtown that would include an Olympic-sized competition pool, water slides and sports fields. The estimated cost of constructing the facility is projected to be between $38 and $42 million (Photo Courtesy of YMCA).

The YMCA of Austin is looking for help from Austin City Council to build a 40-acre recreational aquatics center in downtown Austin as a family-friendly escape from the heat.

If constructed, the complex would be located between South Mopac Expressway and the intersection of Lamar Boulevard and Cesar Chavez Street, said YMCA spokesman Sean Doles.

It would include an Olympic-sized competition pool, a recreational pool with water slides and a lazy river as wells as several sports fields, Doles said.

The city of Austin owns the area and will retain ownership of the land if the project moves forward, although the YMCA of Austin will manage the facility, Doles said.

“What we are talking about is an unused piece of land that is largely inaccessible,” Doles said. “We have a comprehensive park plan that would be a destination not only for residents, but for people from all over the world. The state-of-the-art competitive pool would attract national events, potentially bringing thousands of people to Austin and millions of dollars in revenue to the city.”

Doles said the pool would be open to Austin residents on a day-to-day basis for free or for a nominal fee. He said it would be a resource for families, a place where school teams can train and a new venue for the YMCA’s existing programs, such as free community swim lessons.

“Our aim would be for [the complex] to be a self-sufficient entity,” he said. “We are confident that after receiving these initial funds we will not need further government subsidies.”

Doles said cost estimates for the facility are fluid, but he estimates the project to cost between $38 and $42 million. The YMCA has suggested that the city contribute $25 million towards the project, Doles said.

Austin City Council member Laura Morrison said proposed city costs were only $6 million when she first heard of the project in September and have ballooned since then.

“The funds would need City Council approval to be placed on the November ballot for the voters to consider,” Morrison said. “The proposed YMCA project has not been [reviewed] and is not in the staff’s recommendation for consideration.

“At a time of tight budgets, investing this amount of taxpayer money on an extravagant facility is ill-advised and raises serious concerns about our priorities,” Morrison said.

Matt Haviland, public health senior, said he did not know how financially feasible the project is, but he thought that it could be a significant resource for students, faculty and staff. Haviland said he could see transportation being a slight issue, but the city and UT bus systems offer fairly convenient transportation to downtown Austin. He also said UT faculty and staff who live near campus could benefit significantly from the new facility.

“The Gregory Gym Aquatic Complex is a little small based on the student population,” Haviland said. “It is really nice to have outside facilities like Barton Springs where students can exercise. From a health perspective, even 30 minutes of exercise a day can create substantial health benefits.”