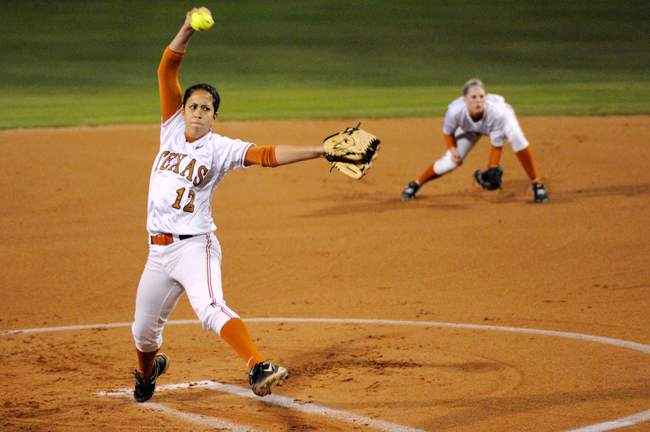 Junior Blaire Luna (1-0) threw a shutout for the Horns and only allowed two hits. While the Horns performed well on offense, she led the defensive effort.

The start of the new season brought new records for the Longhorns Thursday night. Texas shut out the Titans from California State Fullerton winning by a school record 23 runs. The five-inning game broke UT’s single-game record, shattering the former of 17-0 from 1999. The Longhorns came out strong and consistent every inning, starting out with three in the first, nine in the second and eight in the third, giving them a 20-0 lead after only three innings.

Junior Blaire Luna earned her first victory of the season in the complete-game shutout, giving up only two hits and one walk. Luna, who recorded her 28th career game shutout last night, recorded twelve strikeouts with eight coming in just the first ten batters. The two-time second team All-American didn’t have a hit on her until the fourth inning and the only other one coming in the fifth.

Sophomore Mandy Ogle, who had a three-run homer in the second to build Texas’ lead to 12, was very impressed with her team’s play, especially Luna’s.

“Blaire was definitely on; the whole team was,” Ogle said. “We wanted to get this season rolling because we were excited about this year. Everyone was pumped. We were all cheering [today] and we couldn’t focus in study hall.”

The 513 people in attendance at McCombs Field saw the Longhorns start the season how they wanted. Coming into the game it was unknown how they would recover from last season and how they would start their new season.

“I really didn’t know what to expect,” said head coach Connie Clark. “I felt confident that we were going to play well and I believe in our team. We have tremendous talent, but we have talked about how it is in the mental pieces.”

It was a team effort by Texas with multiple players on the team stepping up. Senior Lexy Bennett recorded a home run in the third, the 24th of her career. Junior Taylor Hoagland tallied her 27th career home run, fifth in UT history, and got her 42nd stolen base. Finally, sophomore Brejae Washington hit three for four, scoring three runs and hitting four RBIs.

Hopefully this was the start of a strong season for the Longhorns. They take on UTSA in their second game of the Texas Classic tonight, where they look to stay consistent and carry the momentum from Thursday’s game.