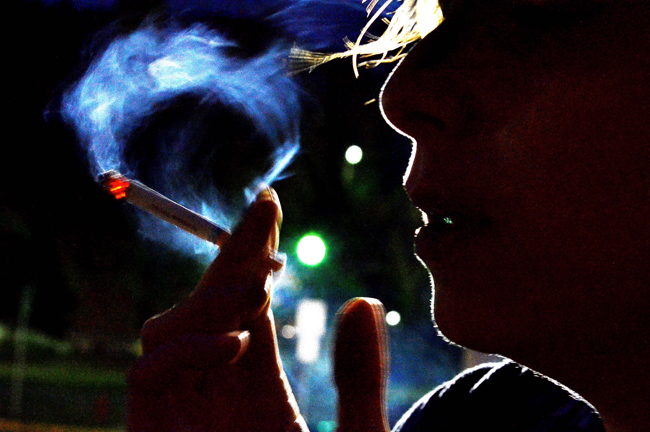 A student smokes outside of the Communications plaza Thursday evening. The university could lose millions of research dollars from one of its top research funders if it does not adopt a tobacco-free policy by March 1.

Fumes from the University’s tobacco policy have ignited conversation over the future of the substance on UT grounds.

Because of a new provision from one of the University’s top research funders, UT will need to enact a tobacco-free policy or risk losing millions of research dollars.

The Cancer Prevention Research Institute of Texas, a voter-mandated organization that awards millions of research dollars each year to entities pursuing cancer research, released a statement on Feb. 2 stating it will now require all current and future grantees to create tobacco-free workplaces as a condition for accepting the Institute’s funds. UT currently receives approximately $31 million for cancer research from the Institute and is applying for $88 million this year.

The Institute has given UT until March 1 to make appropriate policy changes.

In a campus-wide email on Wednesday, University officials said they will be meeting with various organizations on campus — including Student Government, Faculty Council and Staff Council — over the next two weeks to discuss policy options. University spokeswoman Adrienne Howarth-Moore said losing this money would be detrimental to the University’s research endeavors.

Howarth-Moore said if the University adopts a tobacco-free policy by March 1, it will seek to support current tobacco users by providing education and resources.

“Education, communication and helping people understand the reason behind the change is going to be a challenge,” Howarth-Moore said. “We don’t just have a focus on research, but cancer research. We want to be able to eradicate cancer.”

If adopted, the smoking ban will also restrict smoking and tobacco during times of sporting events and tailgates, Howarth-Moore said. Exceptions will only occur in special circumstances, such as when tobacco is used for research or as a prop in a fine arts production.

Current UT policy on tobacco only addresses smoking tobacco, which is not allowed in any University-owned or leased building or vehicle, but is allowed on campus as long as it is 20 feet away from a building entrance. UT-Arlington, UT-Brownsville and the UT Health Science Center in San Antonio are currently tobacco-free. Austin Community College, Huston-Tillotson University and Texas State University all banned tobacco use on campus last year.

In March 2011, UT President William Powers, Jr. said he opposed a campus-wide ban on smoking during an address to Staff Council. Powers said such a ban would overstep the limits a University should impose on its community.

“What we’re doing is saying we are going to limit the freedom of the person who wants to smoke for the benefit of the people who don’t want to be in a smoke-filled office or room,” Powers said in the address, according to a March 2011 Daily Texan article.

Student Government passed a resolution in 2011 declaring UT to become generally smoke-free campus over a period of seven years. The resolution called for the creation of a taskforce to decide policy implementation and an expansion of the University Health Services student smoking cessation program “Quitters” to extend to faculty and staff. SG and the Student Organization Safety Board recently co-sponsored “Tobacco Talks,” a series of conversations with professionals and students on campus to discuss the negative effects of tobacco.

Philip Huang, medical director for the Austin-Travis County health and human services department, spoke at Tobacco Talks on Thursday and said many entities around Austin have implemented tobacco-free policies, including City of Austin libraries, Capital Metro and Austin Parks and Recreation centers. Huang said 70 percent of people surveyed by Travis County said they wanted to quit smoking and 60 percent of all litter in 32 Austin parks comes from tobacco, equaling to approximately 23,000 cigarette butts.

Huang said a tobacco-free policy is a step in the right direction for UT and that in four years incoming students will know no other policy.

“A lot of it is changing social norms,” Huang said. “A lot of people put up with other peoples’ smoke but they hate it. People have more of a right to breathe clean air than smokers have the right to smoke.”

Of the 1,551 respondents, 77 percent indicated they want a stronger tobacco policy at UT. Among the people who identified as smokers and took the survey, approximately 33 percent said they wanted stricter limits on tobacco use.

“I imagine the survey results will convince President Powers that there is a lot more support for a new tobacco policy than he might have supposed,” McAlister said. “It’s been a bit embarrassing for this University to be one of the last schools that’s not tobacco free.”

McAlister said some of the benefits of a tobacco-free campus would include less exposure to second-hand smoke and less tobacco litter. He said a ban would also help encourage smokers to quit and prevent some students from starting to smoke.

Thomas Haviland, public health senior and president of the UT Texas Public Health Organization, said there is a definite possibility UT will implement a tobacco-free policy on campus. Haviland said he has seen people violating the current policy all over campus and smoking within 20 feet of buildings, some of which contain ashtrays five feet away from their entrance.

Haviland said even though the Institute’s decision plays a huge part in the administration’s actions, the issue has been building up and needed to be addressed.

“They had to do something,” Haviland said. “On top of student desire, health benefits and financial savings, a lot of people on campus really do want it.”