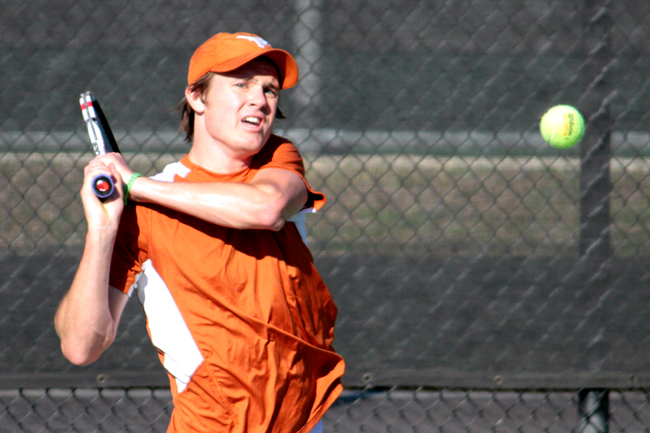 Junior Daniel Whitehead is ranked 112th in the pre-season singles rankings. He is the only member of the squad ranked in singles. (File photo)

In recent years, the Longhorns have been known for having a strong team of ranked players and senior leadership. This season, the Longhorns won’t be able to boast that luxury, as they have only one ranked player on a team with six underclassmen and no seniors.

Instead, they will rely on a junior to lead them through a tough schedule against several top 20 teams.

Daniel Whitehead is the only ranked player on the young Texas team, at No. 112. But more important than his ranking is his ability to lead the team through the long season ahead.

“To be a leader on the team, you have to do a lot of things,” said head coach Michael Center. “You have to be a guy that does it yourself first and foremost, works hard, shows up on time. [Whitehead] does a very good job of that.”

Elected a team captain by his teammates, along with redshirt junior Alex Hilliard and junior Chris Camillone, Whitehead is also able to rally the team around him during a match with his on-court show of emotion.

“Daniel’s a very emotional guy on the court,” Center said. “He is a fiery guy. He competes hard and I think he’s a guy that’s kind of a magnet for our team. They’ll see him get excited and it gets them excited.”

That wasn’t always the case though, as Whitehead admits it took some time to adjust to playing on the collegiate level.

“When you come in [before college] you’re always playing with people around your own age, maybe one or two years off,” Whitehead said. “But when you come in as a freshman, you’ve got maybe a 25-year-old guy who just played two years pro, so it’s just more mature of a game — quicker, more powerful and all that, so it takes a little bit of an adjustment.”

“He was basically just trying to run balls down and put them in play using speed and quickness,” Center said of Whitehead’s game before he arrived at UT. “Now, he’s a much stronger player. He plays much more aggressively, he gets to the net a lot more, his volleys have improved, so he’s really become a much more complete player since he’s been here.”

Center points to Whitehead’s play against Texas Tech in the Intercollegiate Tennis Association’s Kick-Off Weekend hosted by Texas as an example of Whitehead’s improvements. Not only did Whitehead knock off a top 20 ranked opponent in straight sets in his singles match, he and doubles partner David Holiner saved a match point and won the tiebreaker to win the match and claim the doubles point for Texas.

According to Whitehead, he doesn’t think his ranking is the reason he is considered the team leader.

“I feel like I would be one of the leaders because there are a lot of young guys that haven’t played in a lot of matches,” Whitehead said. “So as one of the guys that has played more matches, I would help them in that way, but not because of the ranking.”

While one might consider being a ranked player something to brag about, Whitehead’s focus is on the team, not his individual stats.

“I’m not too worried about individual rankings; that will work itself out if we’re playing well as a team,” Whitehead said. “[The ranking is] not my big focus.”

The Longhorns will put their No. 14 team ranking to the test against rival Texas A&M this weekend as part of the Texas Cup. The non-conference dual against the No. 11 ranked Aggies is set to start at 6 p.m. at the Downtown Club at the Met. This is the fifth year Houston has hosted the Cup. Last year, No. 5 Texas defeated the No. 10 Aggies 4-3 to claim the cup.

Both the Aggies (4-1) and Longhorns (5-1) share a common defeat as both teams lost to No. 2 Virginia last weekend. Texas could face the Aggies again next weekend, as both teams are in the same half of the draw for the ITA National Team Indoor Championship, hosted by Virginia. Texas will finish their weekend off with a match at Texas A&M Corpus Christi on Sunday.