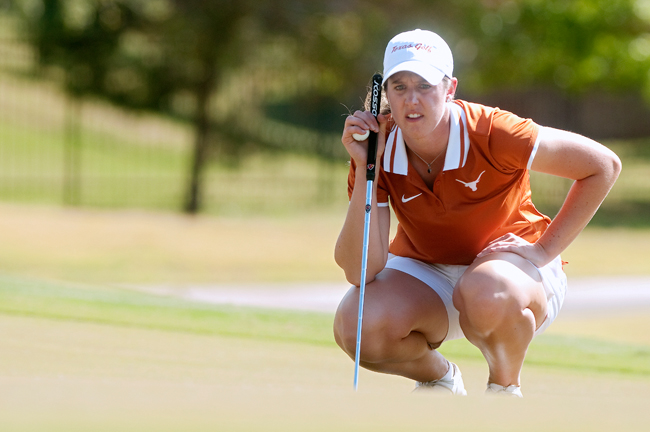 Senior Nicole Vandermade, lining up a putt, leads Texas at 2-over-par (146) through two days at the UCF Challenge, seven strokes behind the lead.

Despite unusually wintry conditions in Sorrento, Fla., Texas finds itself in the middle of the pack after the second of three rounds of the UCF Challenge. In Texas’ first tournament in over three months, it didn’t take long to shake the rust off for senior Nicole Vandermade and the rest of the Longhorns. Texas ended the first round shooting four-over-par (292) in a tie for sixth place out of the 18 teams who played Sunday.

Coming off her first collegiate win in November, Vandermade was one of only 12 players on Sunday to shoot under par, posting a one-under-par (71), showing she can play with the best of them in any conditions.

“For someone like Nicole, who is a very long hitter, it requires some patience and management,” said Texas head coach Martha Richards. “She’s gonna have to be patient and understand that she has an advantage, even though she’s not hitting driver off the tee every hole.”

Currently ranked 15th nationally, the Longhorns hold the second-highest ranking in the field, only behind No. 3 Auburn.

However, the Longhorns didn’t fare as well on Monday, shooting 14-over-par (306). After starting the day only four shots back of Baylor, the tournament’s leader after day one, Texas struggled to make shots on the back nine, ending the day in 11th place, 29 shots back of Auburn, who is currently on top of the leaderboard. Individually, Texas is still in the hunt, with Vandermade only seven shots back of the leader while junior Madison Pressel is 10 shots off the pace.

Ironically, Texas played much better on Sunday when temperatures were in the 30s and 40s and winds whirled the ball all over the course.

“You just try to remind them that when it’s cooler out, the ball doesn’t go as far,” Richards said. “You have to remind them of the weather conditions so they don’t get frustrated and they just focus on the task at hand.”

All five players scored better in the first round than the second round, but should have a fighting chance Tuesday for the final round. When asked what her ideal golf conditions would be, coach Richards simply said, “75 [degrees] and sunny.” Tuesday’s forecast calls for a high of 78 and sunny skies.

Printed on, Tuesday February 14, 2012 as: Horns hoping to bounce back in tourney's last day