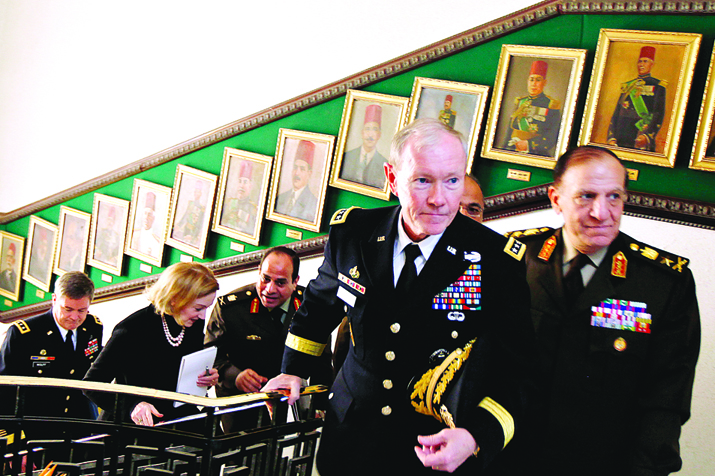 U.S. Chairman of the Joint Chiefs of Staff, Gen. Martin Dempsey, left, walks next to Lt. Gen. Sami Anan, right, upon his arrival to meet the head of Egypts ruling military council, at the Ministry of Defense in Cairo, Egypt on Saturday.

CAIRO — Stoking tensions with Washington, an Egyptian Cabinet minister has accused the United States of directly funding nonprofit groups to create chaos in the country following last year’s ouster of longtime leader and U.S. ally Hosni Mubarak, according to comments published in state-owned newspapers on Tuesday.

International Cooperation Minister Faiza Aboul Naga made the remarks in a testimony she gave in October to judges investigating allegations the groups used foreign funds to foment unrest.

Aboul Naga, a leftover from the Mubarak regime who has served in three interim governments formed since his ouster, has been leading the crackdown on the foreign groups. Authorities last week referred a total of 43 employees of nonprofit groups, including at least 16 Americans, to trial before a criminal court.

The Americans include Sam LaHood, son of U.S. Transportation Secretary Ray LaHood. All 43 are banned from travel. No date has been set for their trial.

The crisis has soured relations between Egypt and the United States, which has threatened to cut off aid to Egypt — a total of $1.5 billion a year in military and economic assistance — if the issue was not resolved. The release of Aboul Naga’s testimony four months after she gave it suggests that Egypt may not be willing, at least for now, to ease tensions with the U.S.

Aboul Naga said international and regional powers did not want Egypt to prosper following Mubarak’s ouster, so they resorted to the creation of chaos.

“But the United States and Israel could not directly create and sustain a state of chaos, so they used direct funding, especially American, as the means to reach those goals,” she was quoted as saying.

She also claimed that some of the money came from the U.S. economic assistance to Egypt — which currently runs at $250 million a year.

Aboul Naga claimed Washington directly and illegally funded the nonprofit groups in what amounted to an interference in Egypt’s internal affairs, a challenge to its sovereignty and harms national security.

“Evidence shows the existence of a clear and determined wish to abort any chance for Egypt to rise as a modern and democratic state with a strong economy since that will pose the biggest threat to American and Israeli interests, not only in Egypt, but in the whole region,” she was quoted as saying.

The allegations facing the nonprofit groups are tied to the turmoil roiling Egypt for the past year.

The generals who took over from Mubarak when a popular uprising forced him to step down a year ago have routinely accused the pro-democracy groups behind their predecessor’s overthrow of following a “foreign agenda” and of seeking to plunge Egypt into chaos or even topple the state itself.

The Egyptian military has been the recipient of $1.3 billion in annual aid. America’s top soldier, Chairman of the Joint Chiefs of Chief of Staff Gen. Martin Dempsey, held talks with the ruling generals last weekend in Cairo, but appeared to have made little or no progress on resolving the issue.

“We discussed that (situation) very professionally,” Dempsey said during his flight back from Cairo. “I expressed the fact that it caused us concern, not only about the particular NGOs and individuals currently unable to leave the country, but rather more broadly.”

“But we’ve got some work to do” on resolving tensions over the issue of the nonprofit groups, Dempsey added, “and so do they.”

Under the aid program, Egypt’s military has been able to modernize and replace its antiquated Soviet-era arsenal with modern weapons, including fighter-jets, tanks and armored personnel carriers. Dempsey, underlining the close ties between the Egyptian and American militaries, said 200 to 300 Egyptian officers are in the United States at any given time attending military schools.

The close ties raise questions about why the generals, led by Mubarak’s defense minister for 20 years, Field Marshal Hussein Tantawi, want to risk such a lucrative and beneficial relationship over the issue of the nonprofit groups.

However, they have near absolute powers in Egypt and Aboul Naga could have only led the crackdown on the nonprofit groups with their endorsement.

This has prompted many in Egypt to speculate that the military may be willing to risk losing the U.S. aid to weaken the pro-democracy groups harshly critical of the military’s handling of the post-Mubarak transition and its poor human rights record.

By discrediting the groups, the generals also hope to build an image of themselves as the nation’s only true patriots, cashing in on the deeply rooted suspicion of the West felt by many Egyptians.

But the tension in U.S.-Egyptian relations was belied by photographs published in Cairo’s newspapers Sunday, the day after Dempsey met Tantawi. One showed the two sharing a hearty laugh, while another had Egyptian Chief of Staff Sami Anan giving Dempsey a warm welcome at the Defense Ministry.