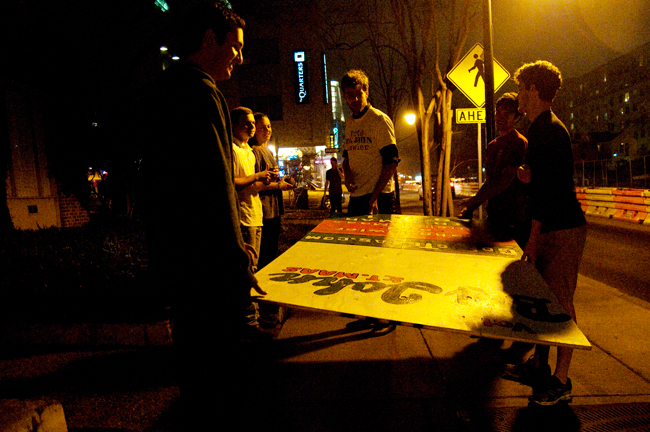 John Lawler, a Student Government presidential candidate, and his team put up promotional signs to kick off the campus-wide campaign which began at midnight. Candidates will have until February 29 to prepare for the election and to rally student votes.

At midnight, students from all UT colleges began a two-week political race that happens only once a year — the campus-wide general elections begin today.

Beginning today, students running for different leadership positions on campus, including Student Government president and vice president, college representative, Graduate Student Assembly president and Daily Texan editor, will have until Feb. 29 to campaign for student votes across campus. Candidates will face a different field this year because of the changes to the election code that expand the Election Supervisory Board’s authority off campus and disqualify candidates if they exceed their spending limit by 20 percent.

Elections will be held March 1-2, and results will be announced March 2 at 5 p.m.

Truc Nguyen, finance junior and supervisory board vice chair, said the election code is very different from last year and candidates need to follow it or they will be disqualified. Nguyen said there were incidents of candidates campaigning off campus last year and the Board will be paying more attention to off-campus campaigning this year.

Nguyen said last year some of the candidates campaigned at fraternity and sorority houses, placed signs in West Campus and asked people to vote for them on personal laptops.

“When they campaign in West Campus, and I know they will, if they violate anything and somebody notices we will have to look into it,” Nguyen said. “Because of the new election code, I expect the candidates will pay more attention to everything they’re doing.”

Nguyen said she thinks the new rules will be good for the elections because the Board will be able to make sure rules are enforced off campus as well as on campus.

“These rules can be very easily violated if candidates don’t pay attention,” she said.

“Every year elections are different,” Sutton said. “There are new things brought up or things that haven’t been considered before. The changes to the election code do require that we be even more careful and make sure ESB be more thorough as we review.”

Ashley Baker, Student Government vice president, said at this time last year she felt nervous about the start of campaign season but excited because she could finally ask people to vote for her and Student Government president Natalie Butler. Baker said she and Butler had a core team of people helping out with logistics and more than 100 volunteers out tabling and talking to other students.

Baker said her biggest challenge during campaign season was remembering she was a student and she had to go to class.

“Don’t forget your purpose, don’t forget who you are and what you believe in,” Baker said. “It gets really intense sometimes and there are times when you can only see tomorrow or only see next week or you only can see until you win but you have to think about the bigger picture and why you’re doing what you’re doing.”

Civil engineering senior Kristin Thompson is Desai’s campaign manager and said she chose to work with him and Langston because they put themselves on the same level as everybody else and they have a passion for student involvement.

“Our campaign platform is very fluid and we’re open to listening to issues others may bring to the table,” Thompson said. “At our event we took questions and allowed everyone in the room to voice their concerns.”

Corporate communications sophomore Taylor Pousson attended Gardner’s kickoff event and said he is supporting Gardner because he has is an open and engaged person that can serve students well.

“I plan to help out as much as I can in the next few weeks,” Pousson said. “It will be interesting to see how it all plays out.”