An inside look at Texas Ultimate Frisbee 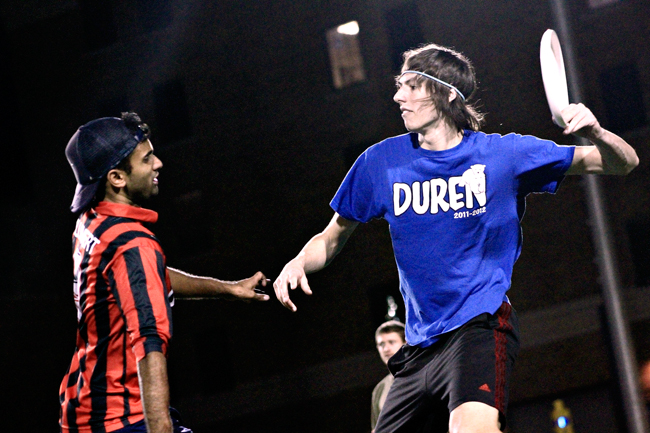 Two members of the TUFF team hone their skills during practice at Clark Field on Wednesday night.

The game of Frisbee has always been thought of as a pastime or hobby when a group wants to find something fun to do. Coach Calvin Lin and Texas’ Men’s ultimate team are proving this thought to mean quite the contrary.

The ultimate men’s A team, Texas Ultimate Frisbee Friends, TUFF, have been very competitive throughout the past few years around the country and intend to keep it that way in how they play as a unit.

“The team has been to nationals the last eight out of 10 years,” said Trey LaMastres, a biomedical engineering junior and team captain.

The team tied for 13th in the nation last year, and even with their steady success, each member expects a lot from each of their teammates, and especially from themselves.

“We want to push each other and make it to nationals, along with reaching our fullest potential,” said Sharief Moghazy, a mechanical engineering junior and president of the team.

Mitchell Bennett, a junior on the team, missed time in the fall due to a broken collarbone.

“Ultimate’s not supposed to be a contact sport, but it ends up happening,” Bennett said.

After this minor setback, Bennett is very excited to get on the field.

“I expect everyone to be faster, jump higher and do everything better than last year,” Bennett said. “I have to be stronger and faster as well.”

Taking a different step from the other top-ranked teams, many of the players for TUFF did not play ultimate in high school, with some having received offers to play other sports for other schools.

Danny Broberg, a fourth-year transfer from the University of California San Diego, actually received offers to play baseball from some Division II colleges, but instead elected to play ultimate due to an injury sustained in high school in his arm. This hasn’t kept him from staying healthy, saying that he “feels more in shape now than when playing sports in high school.”

The workouts that the team undergo each week are also intense, pushing each player to their limits.

“We have a total of seven-and-a-half hours per week, along with track workouts at a local high school for about an hour-and-a-half during our off weeks,” said LaMastres.

“Workouts are really tough,” said sophomore Weston Bowden, a first-year player on the team. “After the practices, you feel like going home and just going to sleep,” he added.

One of the main themes for this year’s team has been to establish mental toughness needed in crucial moments of a match.

“We want to finish strong and play our best when the chips are down,” Lin said. “I want to get each player a little uncomfortable for when it really matters.”

Another important factor that the team has emphasized this year has been to know the basics and build upon it. “My goals are to have a great work ethic and being consistent and fundamentally sound rather than being the most talented player on the field,” LaMastres said. “I want each of us putting in the effort to compete and we accept to fight for every single point while on that field.”

The TUFF team has a difficult schedule ahead of them. Their first set of matches for the spring takes place this weekend with the Mardi Gras tournament in Baton Rouge, La. Two weeks after Mardi Gras, TUFF will take place in possibly their toughest tournament of the year with the Stanford Invite in Palo Alto, Calif. The invite will showcase 16 of the top 20 teams in the country, including the Wisconsin, Florida, Colorado and the TUFF team themselves. During Texas’ Spring Break, the TUFF team will host a tournament themselves called the Centex, which will include 20 teams from around the nation. About two months after Centex, May 25-28, the team will hopefully be competing in the college nationals in Boulder, Colo.

“[We] have a lot of our team coming back this year, so we should at least make the top eight, and if we work harder, we can do better and even reach the quarter semifinals,” Lin said. “We’re most successful when the guys hold each other accountable.”

The competition may not have started yet, but this team is geared up and ready to compete. With the mindset the coaches and captains have and are continuing to instill to each player on the team, they can make greater strides this season than in years past. The game of Frisbee may be viewed as a fun sport to most, but to these guys, it’s that and much more.

Printed on Thursday, February 16, 2012 as: Ultimate team preps for season