Longhorns pull away in defensive struggle 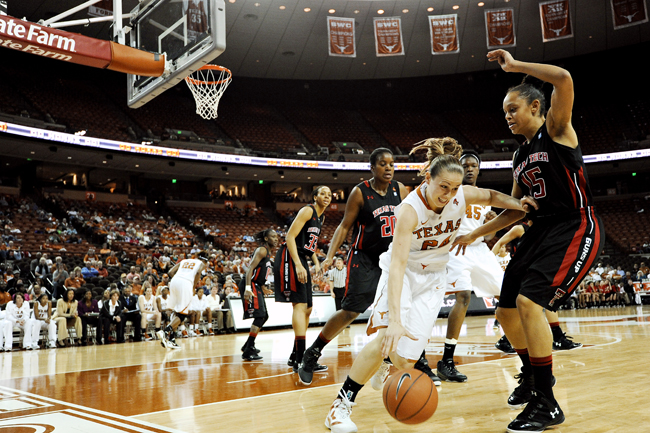 Sophomore guard Chassidy Fussell dribbles past a defender during the Longhorns 64-53 win over the Red Raiders. Fussell scored a game-high 20 points to lead the Longhorns to a big win over their oldest rival. Texas now holds a 61-26 advantage in the all-time series.

For the first time since 2011, the Longhorns have won consecutive games.

Texas (15-10, 5-8 Big 12) got one step closer to the NCAA tournament with a much-needed 63-54 victory over Texas Tech (17-8, 5-8 Big 12) at the Frank Erwin Center on Wednesday night. The win gives the Longhorns their first multiple-game win streak since they won five in a row to close out their nonconference schedule.

“Obviously we didn’t start out the conference [schedule] like we wanted to,” said sophomore guard Chassidy Fussell. “But it feels pretty good to get this two-game win streak.”

The two squads, who are now tied in the Big 12 standings, were tied seven times, traded leads five times and went back and forth all night. But in the final five minutes, Texas took over. A few big shots from Fussell and Ashleigh Fontenette, combined with a couple key blocks from Ashley Gayle, swung the momentum in the Longhorns’ favor as they were able to pull away down the stretch.

“There was a tremendous determination not to lose this game,” said head coach Gail Goestenkors. “Our team as a whole, and our guards in particular, made up their mind that we were not going to lose this one.”

The Longhorns got a huge boost from Fontenette and Fussell, who each played all 40 minutes. Fontenette had 19 points and 10 rebounds to earn her second double-double of the year and fourth of her career. Fussell had a game-high 20 points, made three of five shots from beyond the arc and hit all five of her free throws. The Longhorns were a perfect 10-for-10 from the charity stripe, giving them their first flawless free throw performance of the season.

“I thought the two of them [Fontenette and Fussell] played very well,” Goestenkors said. “Ashleigh played like a warrior the entire game and was not going to let her team lose this game. Chassidy had a couple big buckets down the stretch and I think that was the back breaker for them.”

For the first time in a long while, the Longhorns also dominated in the post.

Texas out-rebounded the Lady Raiders, 44-33, and scored 34 points in the paint while holding Texas Tech to just 14.

“Our posts were determined to have a greater effort here tonight,” Goestenkors said. “It was a total team effort from our posts. They wanted to do a better job tonight and they definitely did.”

The interior unit of Gayle, Nneka Enemkpali, Anne Marie Hartung and Cokie Reed pulled down a combined 21 rebounds, including a career-high 12 from Hartung, and blocked seven shots, four more than the entire Lady Raider team.

The victory over Texas Tech puts the Longhorns back in the NCAA tournament conversation as they head to Manhattan, Kan. for a big matchup with Kansas State this Saturday. With both Baylor and Texas A&M left on the schedule, and only five games before the conference tournament, Texas will need to make it three in a row to keep their tournament hopes alive.

“We have to keep our foot on the gas,” Goestenkors said. “We’ve been able to get a couple big wins over teams that beat us the first time around and now we need to go to Kansas State and get another one.”