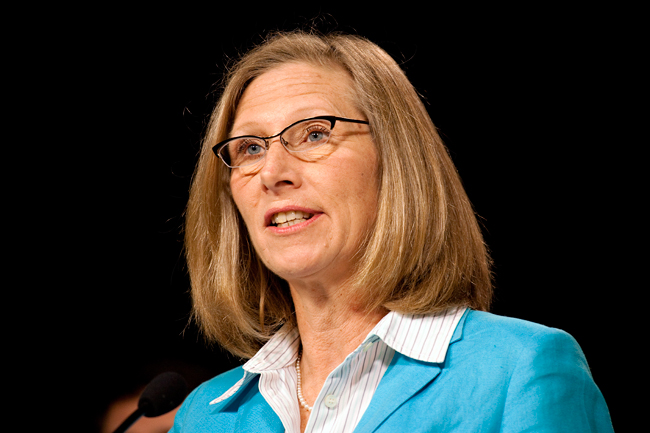 City Council Member Laura Morrison introduces the Austin Code for America fellowship, a program that aims to improve government by mixing technology and transparency Wednesday morning at City Hall. Morrison is Chair of the Emerging Technology and Telecommunications Committee.

City officials welcomed Code for America to Austin yesterday, an organization that helps make government work better for everyone with the efforts of people and the power of the Web.

Austin mayor Lee Leffingwell and Laura Morrison, chair of City Council’s Emerging Technology and Telecommunications Committee, inducted three fellows into the Austin Code for America fellowship program yesterday morning at City Hall. The fellows include Internet lawyer and web developer Joe Merante, graphic artist and designer Emily Moore and web developer Aurelio Tinio. They will work with the City of Austin for one year to come up with creative solutions to improve government efficiency and public access through Web-based technology, Leffingwell said at a press conference.

Leffingwell said Code For America takes a unique approach to public service and supplies local governments with tech-savvy professionals who share a goal of developing innovative projects that will help the community.

Code for America was founded in 2009 by Jennifer Pahlka to make giving back the community easier and more attractive for the Web generation by connecting developers and designers with governments, Merante said.

Open government, which promotes transparency, efficiency and collaboration through technology, has been a main priority of the city of Austin, Morrison said.

“I know the Code for America fellows are helping to leverage Austin’s tech-savvy spirit and our engaged citizenry to move us much farther along and more effectively into the realm of open government,” Morrison said.

Last week, Austin’s Code for America fellows met up with a UT student organization, the Apollo Project, which focuses on various topics of technology policy, Morrison said. The fellows spoke about the purpose of Code for America and discussed broad policy objectives dealing with helping the city establish better open data standards and to get more data available online.

“We want to help more software coders get interested in civic technology and build applications that will help government officials,” Merante said.

On Feb. 25, Code for America will host a national day of civic innovation where each partner city will host “Code Across America,” an event where programmers, designers, project managers and people with public policy interests can gather and brainstorm suggestions received from various city departments, Merante said.

“Everyone is welcome to come and share their ideas about how to improve the Austin community,” Merante said. “People and students with backgrounds in computer programming, graphic design, data visualization and public policy have the opportunity to assist in producing and implementing the many applications we are currently working on.”