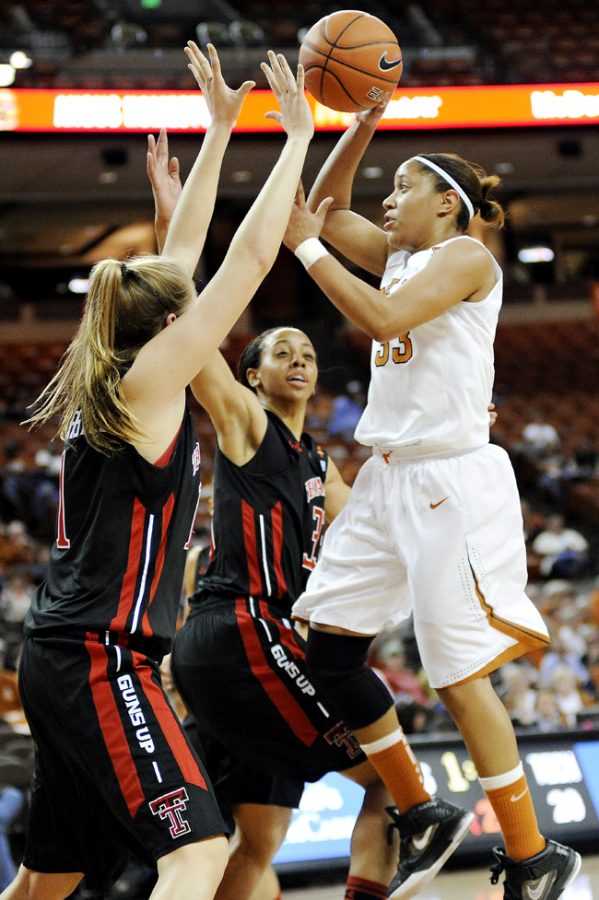 For only the fourth time in her career, senior guard Ashleigh Fontenette recorded a double-double.

It happened to come on a night when the Longhorns desperately needed a conference win against the rival Red Raiders. After winning against Oklahoma State last Saturday, the victory over Texas Tech has Texas enjoying its first win streak in conference play this season. At 5-8 in Big 12 games, the Longhorns still have some work to do if they hope to reach the NCAA tournament, but their most recent win couldn’t have come at a more crucial time.

“Tonight we came out and were not going to lose this game,” Fontenette said. “We kept confidence in each other.”

Fontenette, a Pflugerville native, connected on a career-high nine field goals to the tune of 19 points and added a season-high 10 rebounds, all coming on the defensive end. With her team down four points late in the second half, Fontenette found herself with the ball in her hands.

“I kept looking at the clock and saying ‘We have seven minutes left,’ so there was no need to rush,” Fontenette said. “Nobody wanted to lose, everybody stepped up big tonight.”

The Longhorns were a perfect 10-for-10 from the free-throw line, but it was the Fontenette’s play that enabled them to rally from multiple deficits throughout the course of the game.

“There was a tremendous determination from Ashleigh the whole game,” said head coach Gail Goestenkors. “I thought she played like a warrior, she was determined not to lose this game.”

Texas has shown a tendency of starting games slowly, and this game was no exception. Early turnovers from the Longhorns allowed the Red Raiders to jump out in front in the first half.

“That first half was one of the worst halves of the year,” Goestenkors said. “We just kept turning the ball over.”

After the sloppy first half, Fontenette took it upon herself to take better care of the ball.

“Even going into halftime we kept saying ‘As bad as we’re playing we’re still only down two, so it can only get better from here,’” Fontenette said.

Texas outscored Texas Tech 15-0 on fast break points and forced 16 Red Raider turnovers. Fontenette’s 10 defensive rebounds and two steals helped push the tempo, something the Longhorns have been looking to do all season.

“I think that’s a huge part of our game,” Fontenette said. “As guards, we like to get out on the break but it starts with our defense. When we started getting stops it allowed us to push the ball in transition and get easy buckets.”

The Longhorns will now face Kansas State in Manhattan, Kan. Saturday night in hopes of extending their conference winning streak. The Longhorns aren’t taking the Wildcats lightly and are in search of another season split after losing to the Wildcats 64-55 in Austin earlier this month.

“We need to take care of the ball and have as many opportunities to score as possible,” Goestenkors said. “We’ve split [the season series] with the last two teams we’ve played, so we need to go to K-State and get another split.”