Thornhill, Milner at the top of rotation without much starting experience 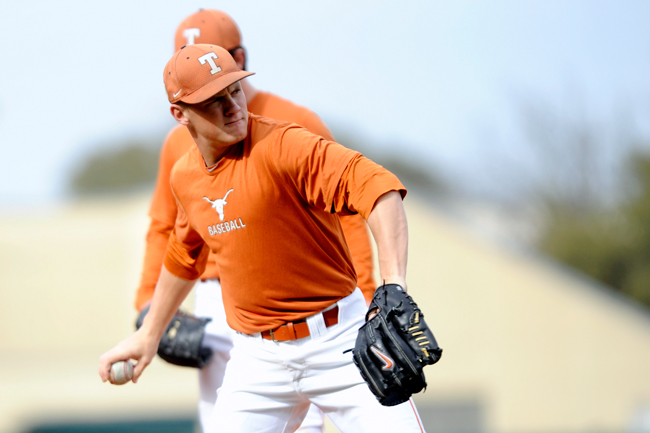 Two of the three members of the staff, Taylor Jungmann and Cole Green were lost to the MLB draft and the team’s projected ace, Sam Stafford, has suffered a shoulder injury that requires season-ending surgery. This all begs the question — who will be included in the rotation? And, perhaps more importantly, who is the ace?

There are two hurlers that will attempt to fill Stafford’s shoes: junior Hoby Milner, the fourth member of last year’s rotation and sophomore Nathan Thornhill, who excelled out of the bullpen last season.

Both have very similar styles on the mound and could each serve as the Friday starter for the Longhorns, although one could distinguish himself as the undisputed ace.

“Hoby and Thornhill are very much the same,” said head coach Augie Garrido. “They pound the strike zone, field their position and hold runners very well. They’re not overpowering or overwhelming but at the same time they are courageous and efficient, which is exactly what we look for in our pitchers.”

Thornhill will start out the season as the team’s Friday night starter and Milner will be pitching on Saturdays. Both will need to be at their best to fill the hole left by Stafford and the quality innings he was expected to provide.

Milner showcased his skills in his very first start of 2011 when he sparkled, pitching seven innings of two-hit ball against Maryland. He also performed well on the biggest of stages, pitching 2.2 innings of scoreless relief in the College World Series.

Thornhill displayed his abilities out of the bull pen, serving as a middle reliever, replacing starting pitchers when they struggled while safely carrying the team to its short-inning relievers. He was effective in this often thankless role with 1.89 ERA.

It was his attitude and toughness out of the bull pen that made Garrido comfortable with making the sophomore his No. 1 guy to start the season.

“His performances provide leadership and certainly there’s quality in his pitching. He is talented,” Garrido said. “He has his own style and identity but it is one that reflects the competitive courage we want all of our pitchers to have.”

However, becoming the ace is completely different than filling in on a day where the starter doesn’t have his best stuff. Thornhill will be expected to be the stopper, the man that ends losing streaks and the guy that other teams dread facing.

At least the Cedar Park native is familiar with the spotlight; he was an all-state starting pitcher and all-district quarterback in high school, both pieces of evidence that prove he can be dominant on the mound.

Thornhill is capable of becoming the staff’s ace but is still young, and it would be a lot to expect an exceptional season in his second year of college baseball and first as a starter.

Milner, on the other hand, is much more experienced. He has pitched in big-game situations and has the experience as a starter to naturally make the transition into the rotation.

He posted numbers last season indicating his ability to become a bona fide starter as Milner was 7-4 with a 2.45 ERA while holding opponents to a .201 batting average.

With another season of pitching under his belt, those numbers could easily develop into statistics characteristic of an ace.

“I’m used to just being the set-up, bullpen guy but it’s an exciting role for me and I’m pumped for it,” Milner said.

No matter how talented the pair is, the loss of Stafford is still a huge blow. But now a young, talented group of Longhorns have the chance to step in and do something great — something that may even include a trip back to Omaha.