Texas looks for tune up in Tuesday night game 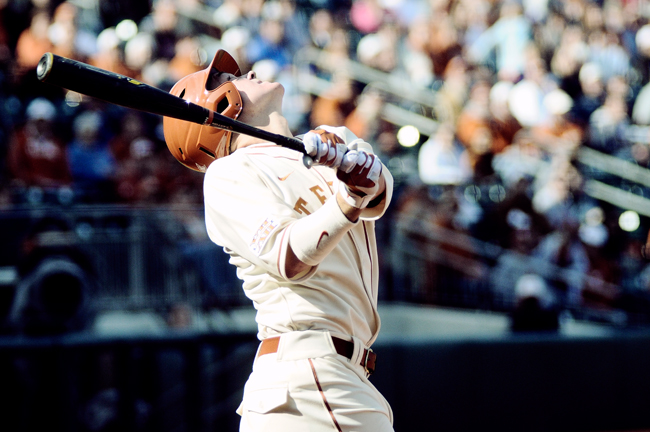 Weekend series are the staple in college baseball, but for most teams, the weekly Tuesday night game is an opportunity to improve.

It is a time for lineups to find some consistency, and it allows players that don’t see a lot of time on the field to get much needed game experience. This type of game is exactly what the Longhorns hope to get out of tonight’s contest against UT-Arlington.

The Longhorns got out of the gates with a 2-1 series victory over Duke, but the performance wasn’t without flaws. The offense looked stagnate at times, and while the team is built around small ball, the batting lineup failed to consistently give their pitchers a boost.

Sunday afternoon’s game was a prime example. The Longhorns pitching staff gave eight innings of mentally tough pitching from two freshmen, John Curtiss and Ricky Jacquez, who didn’t have their best outings, but kept the team afloat allowing only three runs. However, the offense just couldn’t give the pair enough help to secure the victory.

“We have to have sustained rallies,” said head coach Augie Garrido. “We can’t have two or three bad at bats in there where we could’ve had a walk or made the pitcher have a bigger pitch count.”

The struggles were a collective effort as many players in the starting lineup failed to get hits on the board. Starting shortstop Christian Summers and catcher Jacob Felts both failed to record a hit in all three games, and now get to live with the distinction of having zeros next to their names every time they step up to bat.

They weren’t alone though. Junior Landon Steinhagen recorded only one hit in 11 at bats and fellow junior Jonathan Walsh had the same number in eight opportunities.

Even stud third baseman Erich Weiss is struggling early on recording only one hit in the opening series. In Weiss’s case, however, it might just be a case of trying to do too much. This season he is expected to be the man after the team lost three of its top four hitters from last season.

The matchup with a weaker UTA squad — they were only 27-29 last season — could be exactly what Weiss and the Texas’ offense need to get on track and take some pressure off of the pitching staff. A stronger performance from the hitters would be a great thing because another interesting wrinkle of the Tuesday night contest is that your best starting pitchers will not always see the mound.

This is the case for the Longhorns, as seldom used senior Austin Dicharry takes the mound Tuesday evening. Dicharry is a capable player and if he can give the Longhorns five solid innings to hand it over to the bullpen, Texas will be in great shape.