Low lake levels not a problem for Austin Yacht Club 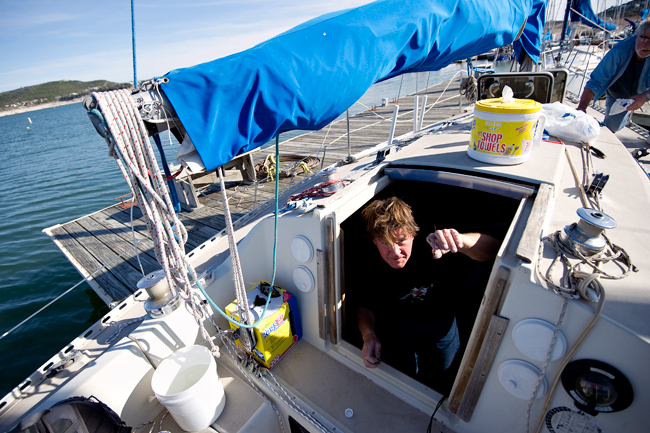 For sailors of the Austin Yacht Club, comfort comes in the sound of water rhythmically lapping against the sides of a boat and looking off into the distance at a horizon of homes dotting the hills that hug Lake Travis. In a sailboat, Lake Travis, which has been troubled by an unrelenting drought, doesn’t feel desolate — it feels like a haven.

Though lower lake levels may pose some challenges, the sailors at Austin Yacht Club continue to raise their sails and spend hours on the water to escape the stress of land life. The club also offers free sailing classes most Saturdays.

“Most of the shallow water areas are marked or are pretty obvious,” Shull said. “The best advice is don’t sail into the brown water, if the bottom is so near that the typical blue water is brown, you should turn around.”

According to Tuma, another challenge declining lake levels pose are the resulting smaller lakes that boats have to share. However, Shull says one of his favorite parts of sailing in low lake levels is the low boat traffic on the water as boat ramps dry out and become unusable.

Shull has been a sailing trainer with the Austin Yacht Club for two years and has been sailing for over 30 years. He loves sharing his passion for sailing with beginners. On Saturdays, Shull takes out his J-29 sailboat and shows students the ropes of sailing, though you won’t catch him calling them “ropes.” In sailing, ropes are called sheets or halyards, depending on where they’re located.

“Half of the difficulty of sailing isn’t the actual sailing, it’s learning the lingo,” said Shull as he leaned back against the rails of his boat with his hand resting loosely on the tiller, the lever that steers the boat.

The sails on Shull’s boat carve through Lake Travis’ notoriously shifty winds while the wind meter, a skinny metal arrow atop the boat’s mast, struggles to stay still. As the wind changes directions, so too must the sails. Shull’s new crew of students quickly learn the essential sailing practice of tacking, or shifting the main sail from one side of the mast to the opposite.

Jorge Martin-de-Nicolas teaches the classroom portion of Austin Yacht Club’s sailing class and has been sailing for over 15 years. He feels fortunate to have Lake Travis to sail on and pinpoints the surrounding hills as a reason for its variable wind patterns.

“Sailing on Lake Travis, you will learn about the wind and what to do when the wind shifts and changes direction,” he said. “This is very common in inland lakes such as Lake Travis.”

Rachel Loziuk, one of the students onboard Shull’s boat this past Saturday, started sailing in August of last year and has been eager to be a part of the Austin sailing scene. She grew up spending summers at her family’s lake house with a love for the water. “Sometimes, I would see a boat out in the distance following the coastline, and I would think, ‘Gosh, I wish I could be out there on it,’” she said.

Eager to build her sailing experience, Loziuk took her turn to steer Shull’s boat and enthusiastically called out what seems to be every sailor’s rite-of-passage command, “Prepare to tack!”

“I never thought I would be able to sail without having lots of money to buy a boat or take expensive classes,” she said.

Despite the extravagant images the name, “Austin Yacht Club,” may bring to mind — 65-foot yachts, bottles of Cristal and other things P.Diddy’s party planners dream of — Shull says the sailing scene in Austin is nothing like that. “I think the biggest misconception is that most sailors are stuck-up ‘yachters,’” he said. “Most sailors are regular people who have a love for sailing.”

Martin-de-Nicolas agreed with Shull. “On a typical Saturday morning we have two choices: mow the lawn or go sailing. So the choice is really pretty easy,” he said.

Printed on Thursday, February 23, 2012 as: Despite drought, sailing remains smooth