Romance novelist hits the spot between love and lovemaking 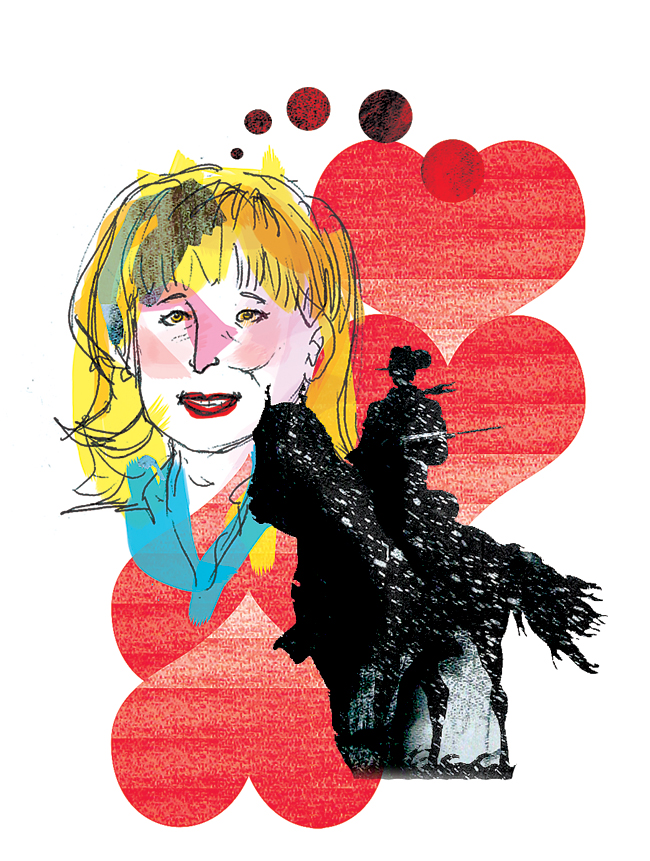 When mother of two Tina Leonard sits down at her computer in her home office, she weaves lavish tales of whirlwind romances and passionate nights of lovemaking.

Hunky Southern cowboys recur in many of Leonard’s novels. From Last Jefferson, a Texas boy hoping to win over the heart of a beautiful magician, to Jack Morgan, a lonesome bachelor who after a night of romance finds out he will soon be a father of triplets, Leonard’s novels bring to life the sexual fantasies of a young Southern belle waiting for her “Prince Charming” to sweep her off her feet.

When Leonard was 28, she told her husband Tim she wanted to write a book. He pulled over the car, went into a convenience store and bought a 99-cent notebook for Leonard to record her ideas.

“Little did he know that 99-cent spiral and his faith in my dream would mean 54 books and counting,” Leonard said.

But it certainly was not easy. After graduating from high school, Leonard decided to pursue a degree in journalism at the University of Tennessee. She had always written as a child and had even won writing contests, so naturally, Leonard felt that writing was her strong suit.

“I made a D in my first college lit class. The professor despised my writing,” Leonard said. “Having thought I had some talent, and finding out that first year of college that I lacked even the basic fundamentals to pass a course I once made As in, I changed schools and went into a merchandising/marketing degree, forgetting all about the writing bug.”

Then, her grandmother got her thinking about writing again. A distant relative of famed author Willa Cather, Leonard’s grandmother was determined that there would be another writer in her family, and she pushed Leonard to look into it.

“I was astonished,” Leonard said. “I remember asking her, ‘Write? What would I write? A children’s book?’”

Eventually, Leonard took her grandmother’s advice, but the words she put on the page were far from G-rated children’s material. Leonard had now been out of college for about five years, and she had not written anything creative in a long time.

Leonard wrote eight books before her first book was published in 1996. She has been publishing since 1998 through Harlequin, one of the leading publishers of books for women.

It took some convincing from an editor for Leonard to finally write lovemaking scenes, and Leonard said she only includes sex scenes when she feels it helps move the story along rather than taking up space.

“Readers know when you’re cheating and just tossing in a sex scene to be gratuitous,” Leonard said. “My mother used to say that I didn’t ‘put in enough of why ladies read these books,’ which I always thought was funny coming from my mother. But the truth is, lovemaking is a highly integral part of a couple’s relationship and falling in love.”

When it comes to creating the perfect characters for her novels, Leonard writes about what she loves: Texas, children and family. She has found that nothing changes and expands a relationship like a baby. Thus many of her stories focus on how a baby can both create difficulties in a relationship and help that relationship evolve.

For Leonard, the real meat of stories does not lie in late-night sexual encounters but instead in the building of a beautiful romance between two people.

“There’s a million moments that happen as two people find each other and their happy ending,” Leonard said. “I’d say less of those million moments are about anything between the sheets than people realize.”

Leonard is happy to make those moments come alive for her readers.

“I’d say any time someone is fortunate enough to be able to do exactly what they want to do, that person is naturally going to be happy,” Leonard said. “There’s never a day that I don’t get up and love being a writer. I have ups and downs like every other writer, but I’ve been very fortunate.”

Although Leonard has had difficulties as a writer, she has always had a strong support system. One of her biggest fans is her daughter, Lisa Leonard.

“It’s always inspiring to hear about someone reaching for a goal and achieving it,” Lisa said. “I got to witness that firsthand.”

Leonard draws inspiration from the goings-on around her to create the steamy love affairs in her novels. Her inspiration comes from day-to-day events such as trips to the movies, reading travel brochures and heartfelt conversations with close friends.

Leonard logs all of her ideas in a journal, because possible plot angles and twists surface at the most unlikely moments.

“When I’m struggling with my characters or a plot point, a long drive seems to help,” Leonard said. “Sometimes those journal entries get used, sometimes they don’t, but they are always there waiting, which is comforting.”

But it appears some of those notes have recently come in handy. More sweet-talking cowboys are set to ride into town on their white horses to whisk unsuspecting women off their feet. Leonard announced that seven more of her novels are soon to be published. Her next novel, “Cowboy Sam’s Quadruplets” is set to release next month.

So as long as sex keeps selling, Leonard will keep writing. And of course, all of her novels have a happy ending.