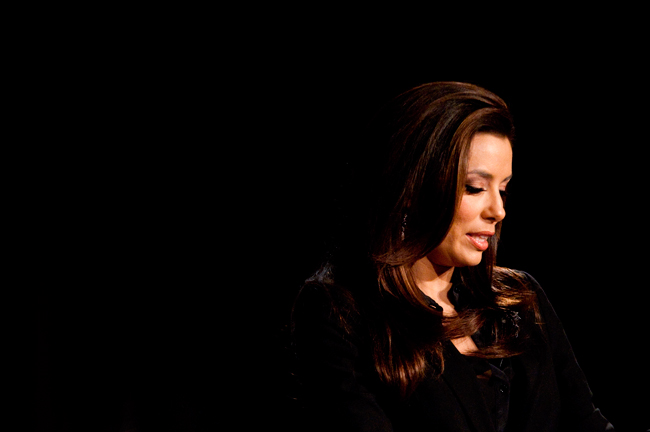 Eva Longoria delivers the keynote for the 2012 Lozano Long Conference at the Student Activity Center, Saturday afternoon. The four-day conference, which focused on changes in American Latino communities, was sponsored by the Universitys Teresa Lozano Long Institute of Latin American Studies and the Center for Mexican American Studies.

Latinos must become more civically engaged by overcoming negative labels and empowering themselves, said actress Eva Longoria during a speech on campus for the 2012 Lozano Long Conference on Saturday.

Longoria was the keynote speaker of the four-day conference and spoke about the changing landscape of the Latino community in the United States. The University’s Teresa Lozano Long Institute of Latin American Studies and the Center for Mexican American Studies sponsored the conference.

The “Desperate Housewives” actress said the character of the United States is changing because of the growing population of what were once minority groups.

“Its important to think about what this means for Latinos,” Longoria said. “It’s time for Latinos to stop being a minority and instead become the biggest influential racial group.”

Provost Steven Leslie, who introduced the Corpus Christi native, said the University is reflective of the growing number of Latinos in the United States with 17.6 percent of current students being Latinos.

It is easy for Latinos to experience an identity crisis when the society they live in does not encourage equality and instead fixates on negative labels that make them feel inferior, Longoria said. She said Latinos should make an effort to better understand their heritage and build cultural wealth through exploration of their backgrounds.

“We need to straddle the hyphen that joins multiple demographic labels through education and empower ourselves,” she said. “We are not lacking diversity in the United States, but we do need diversity of thought.”

Charlie Hale, director of the Lozano Long Institute, said Longoria is someone who hasn’t forgotten where she came from. She was asked to be the keynote speaker of the conference because of how she has used her high-profile status to become an activist on behalf of Latino issues, he said.

“Eva has devoted a significant amount of resources toward collective action to address Latino rights,” Hale said. “She was the ideal speaker for this conference because she speaks from experience as a Latino herself who has worked for her people.”

Norma J. Torres, member of the California Assembly and a speaker at the conference, said Latinos must be involved in the community through whatever talent they have in order to move away from negative stereotypes.

“We have an opportunity to show we are not a class of people that society scapegoats for a bad economy,” Torres said. “We need Latinos to work toward better representing the type of people we really are.”

Torres also said Latinos have a long way to go and there is a need for more Latinas in the political sphere and other influential areas of society.

“You have to strive do be the best in your field like Eva has done to represent what Latinos are really about,” Torres said. “But she is only one Latina, and there are many stories that go untold.”

Longoria said if an individual isn’t civically engaged then they don’t have a voice, and Latinos must be involved in politics to combat incorrect perspectives and inequality.

“I think back on the work of Latina activists from the ‘60s and wonder where today’s Dolores Huerta is,” she said. “Each one of you is an ambassador, and I think they are here in this room right now.”