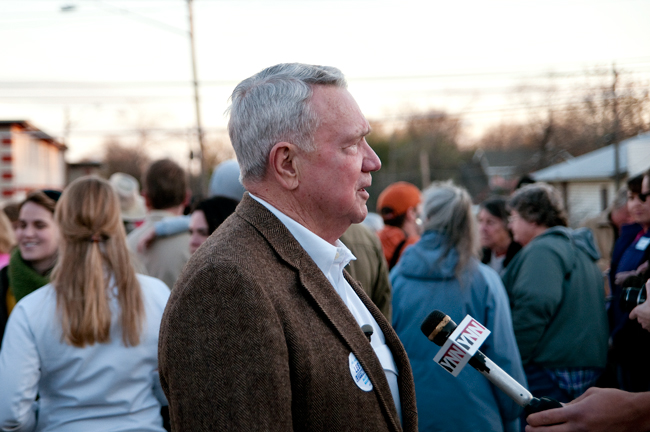 Mayor Lee Leffingwell launched his re-election campaign with an homage to his favorite movie, “Ferris Bueller's Day Off.”

The Leffingwell campaign hosted a kickoff party Saturday night. The party included free beer and food provided by Austin Barbecue Company, live music and a showing of “Ferris Bueller's Day Off” provided by the Alamo Drafthouse Rolling Roadshow. The mayor was present at the event to visit with supporters.

“I just want to give everyone a chance to come out and meet me and see what my campaign is all about and have a good time while doing it,” Leffingwell said.

“I never thought I had much acting talent and I’m still not so sure I do, but people seem to like it,” Leffingwell said.

Leffingwell's campaign manager J.D. Gins said people have responded the most to a scene in which Leffingwell lip-synchs to Wayne Newton's “Danke Schoen” in the shower with his hair spiked in a mohawk.

“I just want to make it clear that I was wearing my swimsuit,” Leffingwell said. “I don't trust those guys [on my team] that much.”

After two weeks online, the video now has more than 10,000 views, Leffingwell said.

Gins said Wynn was in the video because he and Leffingwell are good friends and the video was a way to show their friendship as well as Wynn's political support for Leffingwell.

Gins said councilman Riley was the only council member with an opportunity in his schedule to film and also because the mayor's opponents have been attempting to win Riley's support.

Riley said he thinks the mayor has done a great job in office so when he was asked to act in the video, he was excited to help Leffingwell's campaign. He said he only wishes he was a better actor.

“I've watched it back a few times and I really feel like I could have done more to capture the valley girl persona,” Riley said. “I could have done some hand motions and done more with my voice, but I just wasn't exactly sure what they wanted right then.”

Gins said he hopes the video will receive attention from younger voters and get them interested in voting in local elections. Gins said University Democrats endorsed Leffingwell in the last mayoral election and he hopes to win their support in this election.

UDems communications director Andre Treiber said the group has not made an endorsement yet, but they think the video is a hilarious and clever way to appeal to potential voters.

“We've all enjoyed the video and think it’s a great way to engage people that are typically apolitical,” Treiber said.