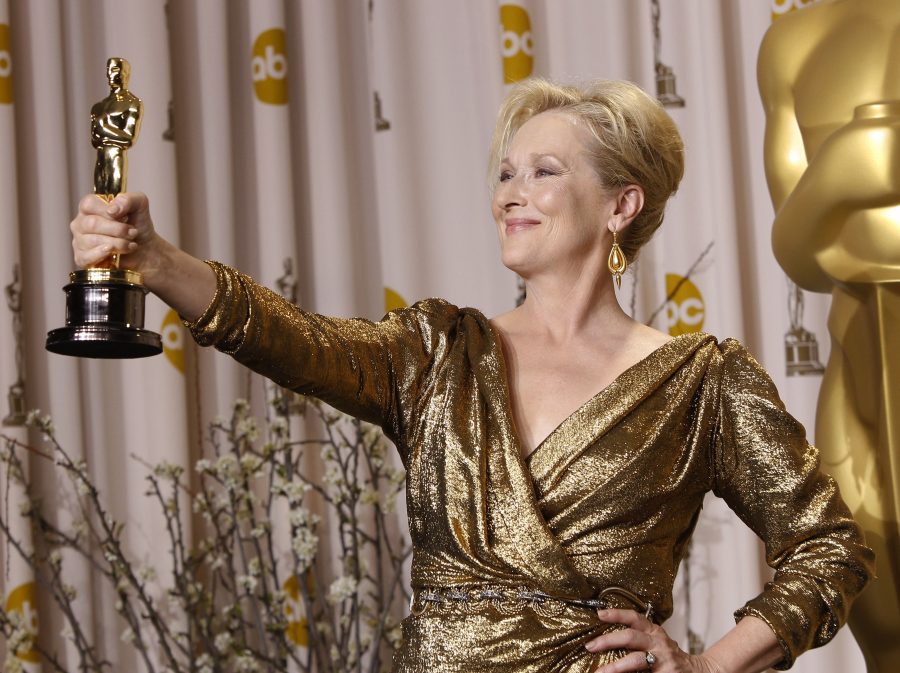 Meryl Streep, who won an Oscar for Best Actress for her part in "The Iron Lady," shows off her trophy.

Another Academy Awards goes by and just a few minutes after, the show is all but forgotten (Jean Dujar — who won for Best Actor?). Except for Angelina’s left leg sticking out of her dress, the show was a tame affair, from the traditional host of Billy Crystal to the largely unsurprising winners. Nonetheless, here are a few highlights (both wonderfully stupendous and gut-wrenchingly bad) from last night.

In a night when even the most casual award show-watcher could have predicted the winners, leave it to Meryl Streep to inject some surprise into the show as the winner of Best Actress, inching past frontrunner Viola Davis. And with that speech so humble and eloquent — which included a heartfelt thanks to her makeup artist for years — Streep showed us all how it’s done.

Speaking of speeches, it was the acceptances from the winners this year that actually kept the show afloat. While there were the usual naming off a laundry list and the stale jokes (please, no more, “[insert kid’s name here], go to bed now!” comments), Best Supporting Actress winner Octavia Spencer offered an emotional shout-out to her home state of Alabama, while Best Actor winner Jean Dujardin could barely compose himself during his endearing and loving speech.

Having Billy Crystal as host was a safe bet, but having him do yet another opening in which he is injected into the scenes of the nominated films did little to reassure viewers that there would be any creativity last night. Nothing screams cultural relevancy than an appearance by that hot new singer Justin Bieber. The whole thing was mechanical and a desperate attempt at freshness.

When even Kristen Wiig and the cast of “Bridesmaids” can’t make you chuckle with some double entendres, you know there’s something wrong with the comedy of the show. Academy, how hard is it to call up Tina Fey?

While it’s understandable the producers didn’t want to waste precious time or man power to bring out a person with a personal connection to the acting nominees to introduce them, as they have in year’s past, having last year’s winner attempt to offer the acclaim just felt insincere. Natalie Portman barely made it through her stilted reading of the teleprompter while introducing the Best Actor nominees.