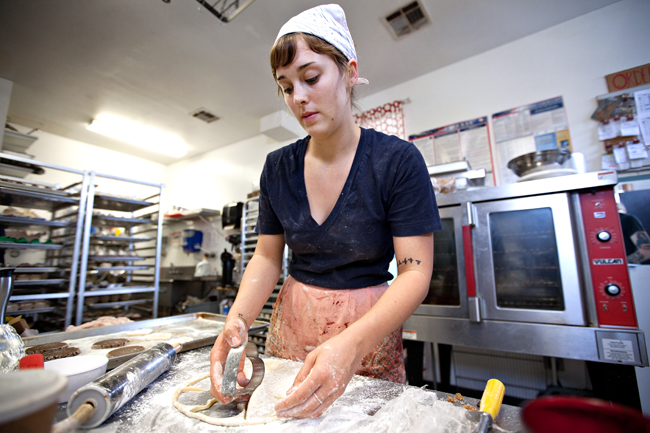 The air inside of Sugar Mama’s Bakeshop smells sweet. Carla Finley emerges from the kitchen with a smile on her face, covered head to toe in flour and cake batter.

Five days a week, Finley wakes up before sunrise. While the rest of Austin sleeps, Finley bakes cupcakes and mini pies in the Sugar Mama’s kitchen. The bakeshop has a 1950s feel. Aprons with appliques line one of the walls, a retro refrigerator sits in the corner and the black and white checkered tiles shine after being freshly mopped.

After graduating from UT in December with a degree in American Studies, Finley found herself in need of a full-time job. She had been working the counter at Sugar Mama’s since September 2008 and when a spot opened up for a full-time baker, Finley took it.

The transition from manning the counter to baking in the back was an easy one for Finley.

“I had a baking job when I was in high school, so I’ve been doing it for awhile,” she said. “I really prefer working in the back because there is this progression. You start somewhere and you see the end product.”

That end product is on display in the front of the bakeshop. An assortment of cupcakes with silly names dominates the display shelf. The Marilyn Monroe, a vanilla cupcake topped with bourbon vanilla icing, and the Southern Belle, a red velvet cupcake with cream cheese frosting, are just a few of their many flavors. Finley’s personal favorite, the Frida cupcake, is a cinnamon chocolate cake with Kahlua-flavored icing.

“Carla is unique, creative and always pushing boundaries, and I believe that definitely translates into her baking,” Post said. “She’s been at Sugar Mama’s for a couple years now so you know she adores that place like it’s her own, but I’m really excited to see where she ends up. I can definitely see her owning her own bakery some day and being known for serving up the most awesome cupcakes.”

Owner Olivia O’Neal opened Sugar Mama’s four years ago because she was interested in owning her own business and loved to bake. At the time, the First Street location was relatively bare. In the last couple of years, it has since grown into a hip area with a number of small local businesses.

“It’s been fun to watch Carla grow and to see her passion for baking develop,” O’Neal said. “She has a lot of fun with it, which is really cool.”

And now, Sugar Mama’s is expanding. The bakeshop recently acquired the location next door and will open its doors in about two weeks. With the extra space, O’Neal plans to sell more retail items such as espresso drinks, wrapping paper and greeting cards.

Finley is excited to see the company grow. The staff at Sugar Mama’s is personable and friendly. The sound of laughter trickles from the back kitchen as Finley and her co-workers bake away while singing along to the oldies being played in the shop.

“We are like a little family,” Finley said. “We all know each other really well, which makes it easier to come in every morning.”

The desserts are delicate, and it takes hard work to craft them. From the moment she arrives at the bakeshop at 5 a.m. to noon when her shift ends, Finley is whipping up frosting, stirring cake batter and weaving pie crusts nonstop. Getting up early every morning is hard for Finley, but everything is made the day it is sold.

“It’s worth it,” O’Neal said. “You can definitely taste the difference.”

And the truth to that statement is proven by the number of customers that come in on a typical Saturday morning. Before the neon open sign can even be illuminated at 11 a.m., a customer is waiting outside to come in. Within 15 minutes, more than 10 customers have come into Sugar Mama’s to test out the cupcakes they have been hearing about from their friends.

So next time your sweet tooth is acting up, give Finley a visit at Sugar Mama’s Bakeshop. She’s probably in the kitchen shying away from customers, but if you ask for her, she’s sure to say a quick hello before heading back to make another batch of sugary treats.