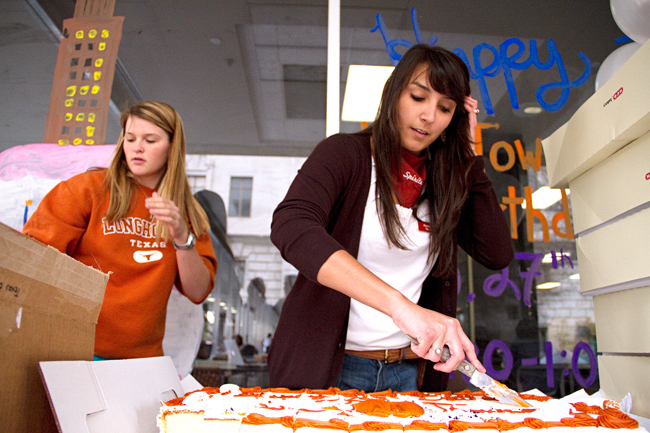 Sophomore Jannah Dies, left, and junior Alysse Fisher slice and plate pieces of cake in honor of the towers 75th anniversary of its comencement. Texas Exes hosted events throughout the day, including free cake and stickers, a tour of the tower and a display of the original architectural drawings.

For the first time since its construction 75 years ago, the UT Tower shone bright orange Monday night in honor of itself.

UT community members celebrated the Tower’s birthday Monday to honor the 75th anniversary of its original commencement ceremony. The Tower is an iconic UT landmark and, at 27 stories, by far the tallest building on campus. Events to commemorate the occasion included an architectural exhibit, a historical tour of the Tower and the distribution of 800 pieces of birthday cake in the West Mall area.

Texas Exes, UT’s official alumni group, funded the event. Matt Portillo, music and rhetoric and writing senior and the co-chair of the Texas Exes Spirit and Tradition Council, said the event was a great way to celebrate something that everyone at UT has experience with.

“Everybody loves the Tower,” he said. “It’s fun when we have the opportunity to celebrate something we all like.”

Jim Nicar, director of the Texas UT Heritage Society, the historical association for the University, said the Tower has a long history of serving the campus and the greater community.

“It was originally built, in part, from $1.5 million in governmental funding approved through the Works Progress Administration, an organization created under the New Deal,” he said. “The building of the Tower put many to work during a time of national difficulty and led to the creation of a large new library at UT.”

Today the Tower serves as home to various core administrative offices, libraries, classrooms and the bells that sound across campus quarter hourly. It is a landmark for visitors to UT and the Austin area. It is also used to commemorate the victories and triumphs of the University community, from national athletic championships to graduation ceremonies, said Tower building manager, Twiggy Aguilera.

The original architect for the Tower, Paul Cret, intended the Tower to represent what the University stands for, Nicar said.

“He purposely put the Tower on top of the hill and made it much higher than any other building on campus,” he said. “Cret wanted the Tower to be what people thought of when they thought about UT”.

“Not only is it something that makes it really easy to navigate campus, but it symbolizes UT,” he said. “It’s just a shining beacon of awesomeness.”

The original vision of the Tower coming to represent the University has come to fruition, said advertising senior Erica Flores.

“When you think of UT, you think of the Tower,” she said. “It is a symbol of campus tradition, unity and everything that makes UT great.”