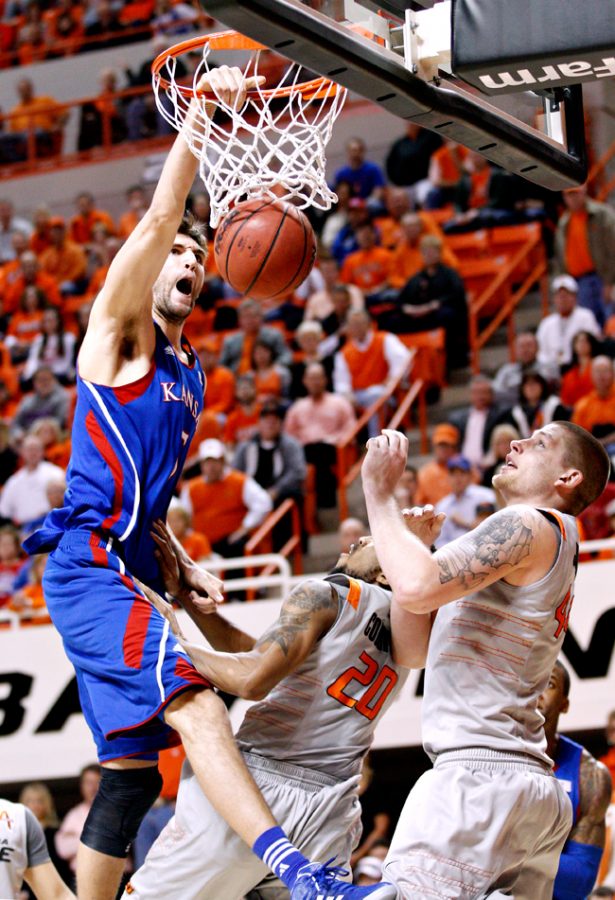 KU wrapped up the program’s eighth consecutive Big 12 regular season title on Monday night with a victory at Oklahoma State. It’s the fifth time during the streak that Kansas will not share the title with another team.

“It’s amazing,” said Jayhawks point guard Tyshawn Taylor. “A lot of people didn’t think we would be this good. Our goal is to always win the Big 12 championship.”

KU is 15-2 in the Big 12 and will host Texas on Saturday at Allen Fieldhouse in Lawrence.

While the No. 3 Jayhawks (25-5) aren’t loaded with NBA talent this season, Bill Self’s squad proved good enough to dominate the collegiate ranks thanks to a penchant for winning away from home.

Self said before the season began that a 14-4 record would be enough to win the league. Instead, the Jayhawks will go for their 16th league victory Saturday against the Longhorns.

Baylor’s senior class took the program to new heights during their four years in Waco.

Quincy Acy, Anthony Jones and Fred Ellis have already been to an NCAA regional final and a NIT championship game, but their Bears’ careers aren’t over yet. The trio set a school record with its 95th win on Monday night as BU beat Texas Tech in the Bears’ final home game.

The senior class won’t have any more home games, but they can build on a school-best 12 Big 12 victories when they visit Iowa State on Saturday.

Baylor made it to the Big 12 tournament final and NIT final in 2008 — the first season for Acy, Jones and Ellis. As sophomores in 2009, they helped BU set a school record with 28 wins and made it to the Elite Eight, where Baylor lost to eventual national champion Duke.

Conference tournament seeding still up in the air

Missouri hosts Iowa State tonight in a game to determine seeding in the Big 12 tournament.

MU finishes the regular season at Texas Tech on Saturday. If the Tigers beat ISU at home or a 1-16 Tech team on the road, they will clinch the No. 2 seed in the Big 12 tournament, which begins March 7 in Kansas City.

Iowa State can clinch the third seed with wins over Mizzou and Baylor on Saturday. BU needs a win against the Cyclones to get the No. 3 seed.