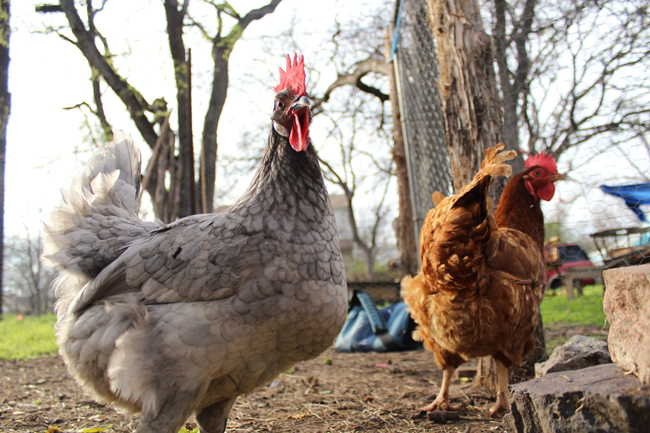 When you think about the common household pets of city-dwellers, chickens aren't usually the first animals that come to mind. But the trend of owning chickens in urban areas proves to be growing in unexpected places, such as downtown Austin. Individuals and businesses alike are discovering benefits of having chicken coops in their back or front yards, such as fresh eggs and dependable companionship.

The practice of raising chickens in an urban landscape is often associated with the “urban agriculture movement.” Owning livestock in metropolitan areas has been common throughout history: Manhattan in 1859 was home to over 50,000 pigs. But now, cities have established laws because of the sounds and smells of farm animals.

“I started reading about [urban chickens] three years ago. I went to Callahan's [General Store] one day on a whim and bought about six of them and built a pen,” said local chicken coop owner Nicholas Arthur.

Arthur lives on a plot of land in North Campus and keeps his chickens in the front yard. Next to the tree stumps that he uses for seats and a table, the hammock stretched out between two trees and the many dogs and cats is the chicken coop. This is a normal sight for the neighbors, but an intriguing adaptation of urban life for those who have just veered off the highway three blocks away.

“I'm attached to my chickens, and I've grown very fond of them,” Arthur said, recalling a time when one of his dogs attacked and killed one of his six chickens.

Austinites can buy chickens at feed stores like Callahan's or Tractor Supply Company, and coops can either be built by the owner or bought from businesses devoted to constructing chicken coops, like Texas Chicken Coops or Chez Poulet.

Not only is chicken ownership relatively easy to get off the ground, the city does little to press regulations on chicken owners. According to the blog Handcrafted Coops, which is devoted to sharing chicken knowledge and encouraging the backyard chicken craze, Austin’s city law mandates “no more than 10 chickens per household allowed, and kept in an enclosure that's 50 feet away from neighbors.”

Carole Barasch, communications and community development manager for Austin/Travis County Health and Human Services Department, said that the ordinances are enforced by the Environmental Health Services Division but are solely citizen complaint-driven.

“You do everything on your own and stick to the ordinances,” Arthur said. “The only time I’ve had a problem was when [the chickens] were wandering around and someone called the city. They came and gave me a warning.”

One reason people decide to raise chickens is for their eggs. Eastside Cafe, off Manor Road, has a garden in the back as well as a small chicken coop. Manager Claire Fielden said that the main advantage of having chickens is their antibiotic-free eggs.

“They're easy to maintain and self-sufficient. The chickens we have yield 'yard eggs,' which are much better for you with a higher nutritional content,” Fielden said.

And some individuals have turned their love for chickens into a business itself.

Patsy Graham started raising chickens in her backyard in Houston when her daughter's agriculture class required that they raise an animal and chose chickens. She has now moved to Austin and owns Chez Poulet, a company that makes urban chicken coops for “small backyard flocks.”

Graham, who was already in the construction business, supports sustainable living, and her goal is to make it easier for new chicken owners by building durable and affordable coops like “The Austin Ranchette” and “The Chicken Ark.”

Some owners face difficulties while attempting to raise chickens in their backyard, like raccoon attacks and sickness.

“I've had in total about 20 chickens, and I've lost about half of those to raccoons,” Arthur said. “Recently, we had a bout of sickness with some chicks and lost some of those. We had to medicate [the others] with antibiotics, and we couldn't eat the eggs for a couple of weeks after they were medicated.”

Other than enjoying the nourishing eggs they harvest, most individuals grow affectionate toward their chickens and see them as nothing less than a family pet.

“They're very restful. Sitting outside and hearing the chickens is very calming,” Graham said.

Despite the occasional clucking and clean up, urban chicken owners are growing and the numbers in Austin prove that they have more to offer than just being farm animals.

Printed on Wednesday, February 29, 2012 as: chicks in the city: Urban agricultural movement gains ground in Austin with backyard coops