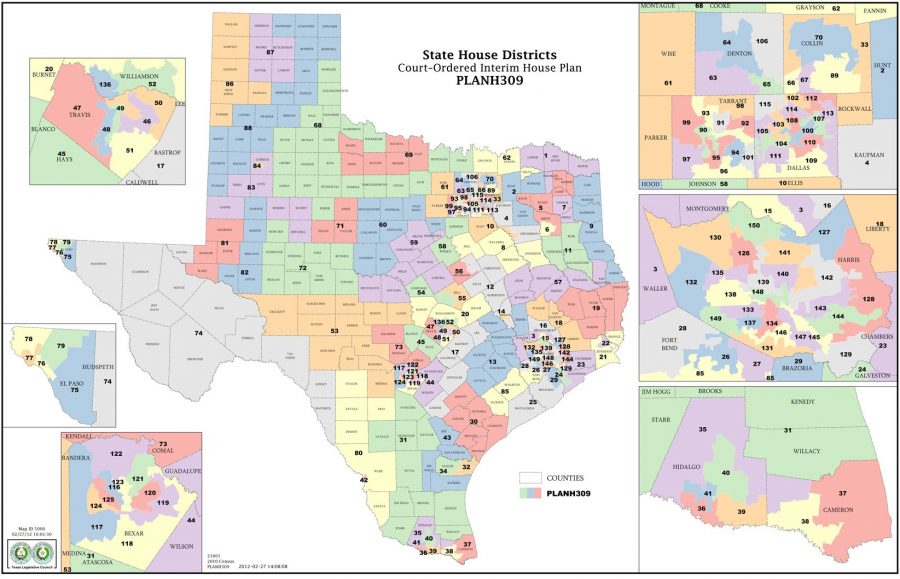 The updated district map for Texas.

SAN ANTONIO — Clearing the way for the twice-delayed Texas primaries to finally land in May, a federal court on Tuesday handed the state new voting maps for the 2012 elections that satisfied Republicans who flexed their majority but soured Democrats who wanted more seats.

The political repercussions rippled across the state almost instantly. Candidates dropped out of races, incumbents resigned themselves to difficult re-election bids, and GOP leaders renewed hope that Texas may have a say in deciding the Republican presidential nominee after all.

A May 29 primary date is still not guaranteed. But barring any appeals by a coalition of minority rights groups that sued the state over the original Republican-drawn maps, the chances of the Texas primaries falling into June or later appeared to dim.

Democrats expressed frustration, but there were no immediate vows that the maps would be challenged. The contentious Texas redistricting clash has dragged on since last summer, reaching all the way to the U.S. Supreme Court in a political battle that has national ramifications because the state was awarded four new congressional seats based on the 2010 census.

Who wins those seats could alter the balance of power in the U.S. House. Under the congressional map unveiled by the court Tuesday, Democrats and Republicans were poised to split the four new seats.

Minorities made up 89 percent of the population growth in the state, and the Legislature’s map would have led to only one new minority elected to Congress from Texas. Minority rights groups accused the Legislature of drawing maps that discriminated against them, and Democrats hardly cheered what the court delivered Tuesday.

“These maps may be slightly better than those passed by a radical Legislature, but they still grossly misrepresent the demographics of our state,” the Texas Democratic Party said in a statement.

The judges released the maps without an opinion but said one would be forthcoming. Trey Martinez Fischer, chairman of the Mexican American Legislative Caucus, said the lack of an opinion for now made it difficult for his group to consider its next move.

“Make no mistake we believe that any map, even an interim plan, must acknowledge 3.7 million new minority Texans,” Martinez Fischer said.

The Republican Party of Texas celebrated the fact that there were maps and that a May 29 primary remained possible.

The Texas primaries originally loomed as the biggest prize of next week’s Super Tuesday before the redistricting fallout forced the state to push the back the primary date. Texas has the most delegates of any state besides California, and the state wants the chance to play kingmaker in the Republican presidential primary before the race is settled.

“This is what we've been waiting on for about three months now,” party spokesman Chris Elam said Tuesday. “We've been anxiously awaiting maps, and this is a great step forward in finally moving ahead with the primary.”

Analyzing the changes the court made to the state House map was harder to discern. Texas Democrats did not get as many seats in the 150-member House as it expected. The court made no changes to districts in the Dallas-Fort Worth area, but made significant changes in Houston that appeared to aid Democrats.

Based on past voting patterns, out of 150 districts, Republicans could expect to win 85, Democrats will likely win 50 and 15 are up grabs.

In the Dallas-Fort Worth area, the court fundamentally redrew the Legislature's congressional map to create a majority Hispanic Congressional District 33, which runs through the center of the Metroplex. Republican Rep. Joe Barton's District 6 creates a right-handed hook through the mid-cities that separate Dallas and Fort Worth.

The court did make significant changes to Republican Rep. Quico Canseco’s Congressional District 23, which stretches from El Paso to the western suburbs of San Antonio. The changes reflected those requested by Hispanic groups, but it was unclear if they were enough to hurt Canseco’s election chances.

In the Austin area, the court kept the Legislature's map of dividing heavily-Democratic Travis County into five districts from the existing three, virtually guaranteeing that an Austin Democrat could not win re-election. The only potentially Democratic district, Congressional District 35, has the majority of residents living in the San Antonio area.

The court-drawn map made no change to the congressional districts in the Corpus Christi area, where Hispanic groups complained their votes were being diluted.

Under the Legislature's map, Hispanics were expected to be able to elect a candidate of their choice in one out of the four new districts. In the court-drawn map, they appeared to pick up at least two.

Time is running out for Texas to hold primaries, and the maps are intended to get Texas through the 2012 election cycle. The fight over redistricting has already seen the Texas primaries delayed from March 6 to April 3 and now May 29. The last day Texans could vote is June 26.

The latest maps come after months of legal wrangling in three federal courtrooms, including the U.S. Supreme Court. The court threw out the last set of maps the San Antonio judges drew saying they did not adhere closely enough to the maps originally drawn by the Legislature.

The ruling does not resolve the two court cases still pending, but is only an interim measure. The San Antonio court must still make a decision on whether the original maps drawn by Republicans last year discriminates against minorities and needs to be changed. That decision is dependent on separate lawsuit in the Washington, D.C., federal court on whether the original maps are legal under the Voting Rights Act of 1965.

The Washington court said it would probably issue a ruling sometime in March.