Austin City Council will vote on plastic bag ban, may include exemptions 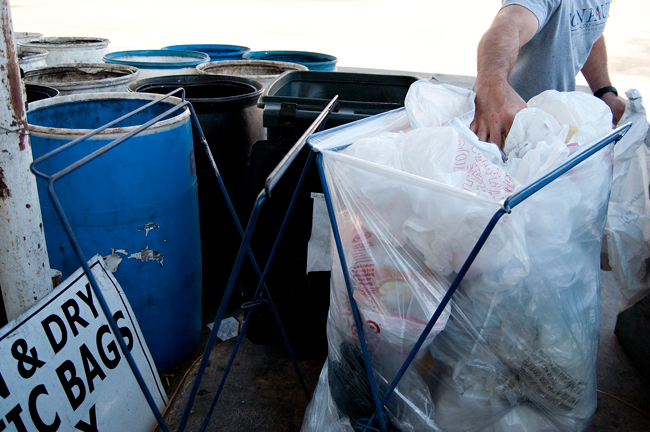 The city of Austin is schedules to vote today on a permanent ban of disposable plastic bags in retail establishments. Bags used for transporting prescription drugs, prepared food from restaurants, bulk items from grocery stores, laundry dry cleaning and alcoholic beverages will not be affected by the ban.

City council is voting today on a citywide ban on disposable paper and plastic bags, which would require consumers to use reusable bags at all retail establishments within city limits.

The ban would attempt to eliminate all use of disposable single-use bags used throughout the city. The first draft of the ordinance was released Dec. 8, 2011 after the city discontinued the Recycle the Bag pilot program encouraging citizens to increase recycling of disposable bags.

The ordinance has undergone two revisions, and the third draft, released Jan. 19, will be voted on after a public hearing at 4 p.m. today. Austin Resource Recovery director Bob Gedert submitted a memorandum of recommended revisions to the current draft of the ordinance, under which the ban is slated to begin Jan. 1, 2013. The memorandum is also scheduled to be discussed today.

“Our vision is to be a national Zero Waste leader in the transformation from traditional waste collection to sustainable resource recovery,” Gedert said. “We’re already at the forefront of waste reduction and Zero Waste within our region and the state of Texas, and our Master Plan is being used as a model in cities throughout the U.S.”

The current proposal includes a temporary customer fee of 10 cents per disposable bag or $1 per transaction lasting from Jan. 1, 2013 to Feb. 28, 2014, in order to allow businesses and consumers to make a successful transition to reusable bags, according to the draft. According to the memorandum, Gedert said he recommends completely removing the fee period from the ordinance in favor of educating businesses and consumers about the ban until Mar. 1, 2013, at which the time the ban would go into full effect.

Exemptions from the ban include the use of disposable bags for transporting prescription drugs, prepared food from restaurants, bulk items from grocery stores, laundry dry cleaning and alcoholic beverages. According to the memorandum, Gedert recommends removing alcoholic beverages from being exempt as well as adding local food pantries to the exemption list.

Leslie Sweet, regional director of public affairs for H-E-B, said having a back-up plan for customers who do not bring reusable bags to every purchase would be an important factor in retailers’ support of the ordinance.

“Not having an emergency option means that we would be asking 100 percent of our customers to remember their reusable bags 100 percent of the time, and we’re concerned that’s not a realistic expectation for over a million customers a week,” Sweet said.

There is a concern over the lack of emphasis on recycling as well as reducing use of paper and plastic bag material, said Ronnie Volkening, Texas Retailers Association CEO.

“We feel like this ordinance has never addressed recycling in an appropriate way,” Volkening said. “It’s not comprehensive and is going to leave tons and tons of bags unexempted. Things like bags you use for your bread and ice are unaddressed, and those are still going to be in the waste stream. Furthermore, this is going to [make it mandatory for] all of us have to buy reusable bags and that’s going to be regressive in nature.”

Volkening said a more educational method would be more effective in reducing waste and increasing recycling by consumers in the long-term.

“What we need to do is measure the way people are [recycling now],” Volkening said. “Then we would begin the education process, including information about recycling, and use that to establish a base line period and measure over a period of time. Retailers keep recycling bins in front of stores, and it’s a growing industry. If people would just bring bags back to recycling bins, they can get remade into a whole range of things.”

Printed on Thursday, March 1, 2012 as: City council to vote on plastic bag ban