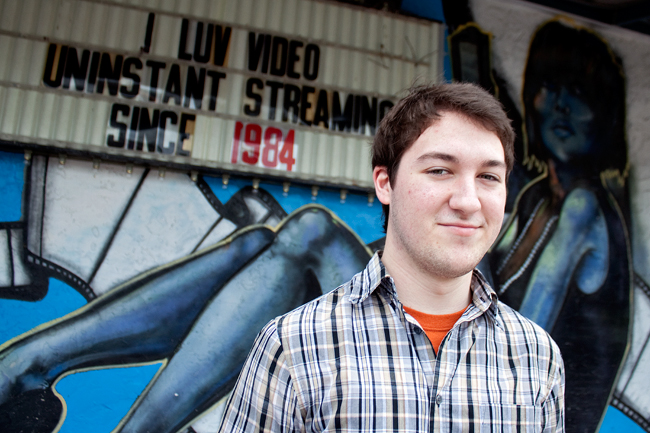 Over winter break, freshman radio-television-film sophomore Chris Gilman and his friend Will Kempner, a student at New York University’s Tisch School of the Arts, wrote, planned and produced their own short film at their friends’ aunt’s house, a dentist office and a nature preserve in New Jersey.

“We produced our film just for fun, just to see what it would take,” Gilman said. “But then I saw the event page [for the Third Annual Texas Union Film Festival] and couldn’t say no.”

“We’re used to showing blockbusters, but we wanted to do something different with this festival,” said Kirsten Martinez, chair of the film committee. “We wanted to give students the opportunity to show their own films.”

The film festival has doubled in its applicants since its initiation in the spring of 2010. This year 20 films will be shown, with the runtime expected to last three hours this evening. The film committee expects 100 people to attend the free show.

“We were really able to get the word out this year,” Martinez said. “We just hope the filmmakers get a lot out of it and are able to get some critique and feedback.”

Marc Bachman, director of the film committee, said the festival is all about The Union reaching out to the filmmakers. Although he has never produced a film himself, he said this is a way for the community to appreciate good student films.

“This is an accessible on-campus festival,” Bachman said. “Yes, there’s South By Southwest but that’s so highly organized and difficult to break into. This is something that validates what the filmmakers are doing.”

Gilman said, like Bachman suggested, he chose to enter this festival to validate his filmmaking. Gilman’s film, “The Boy Also Rises,” runs at approximately 13 minutes in length. The film tells the story of a struggling couple on the verge of divorce with a quiet son. But while the romance is losing its magic and the couple strives to redeem their love, their son is newly “possessed” by magic.

“[His parents] think he’s doing some sort of witchcraft, but it’s all really innocent,” Gilman said. “We wanted to make a dark family comedy that’s meant to be funny and scary at the same time.”

This is not Gilman’s first film. He has made several other short films, however this is the most extensive film he has worked on. Although not normally one to compete, Gilman has said he would enter this film into other festivals around the country after a more unique score is added.

“We basically write the movies we want to see for ourselves,” Gilman said. “I always loved movies as a kid.”

The festival will be judged by Michael Gill, an Austin screenwriter, Katy Daiger, an Austin Film Society community education manager, Erin Hallagan, an Austin Film Festival film programmer and Anne Lewis, a film professor at UT. The judges will be looking for a film that exudes quality and is acted well, according to Martinez. Although there will only be one grand champion, there will also be an award for audience favorite.

“We have a lot of entries because we want everyone to have this opportunity,” Martinez said. “Some have more dramatic story lines and some are more artistic. There’s something there for everyone.”

The film committee wanted students to produce films they would not only enjoy making but would also be entertaining for a student audience. Martinez said she was happily surprised to see the Facebook event has been tagged in status updates all week, something she hasn’t seen in years past showing her the film festival will continue to remain relevant.

“It’s great for these students to be able to take a step away from a movie theatre,” Martinez said. “It’s special to see what these filmmakers are capable of.”