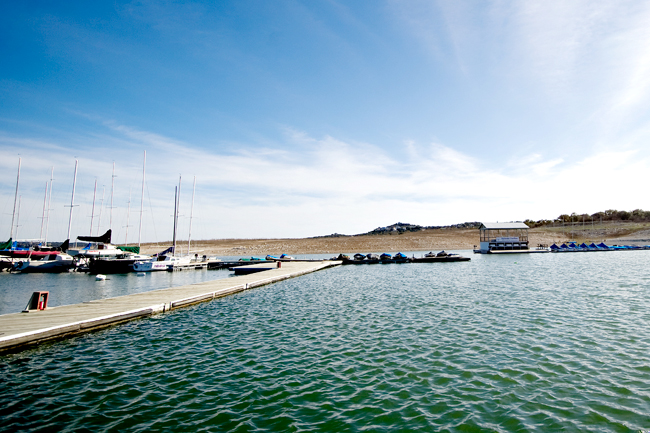 Boats float in Lake Travis last Wednesday before recent rains came through the area. Despite the rain, Lake Travis is still only 39 percent full, and the low levels have contributed to a decline in the business activity of the area.

Although recent rain in Central Texas is steadily filling drought-stricken waterfronts, the lakes and related businesses are still a long way from stabilizing.

Because the Lower Colorado River Authority is still under the Emergency Drought Relief Plan, officials will evaluate water levels of Lake Buchanan and Lake Travis and distribution capacities of lake water again today, said South Texas LCRA spokeswoman Clara Tuma. Tuma said the LCRA typically only evaluates the water levels in January but was given permission by the Texas Commission on Environmental Quality to re-evaluate the water levels for disbursement to farmers in south Texas. According to the drought relief plan, if there is less than 850,000 acre-feet of water in the lakes, the water supply from Central Texas will be cut off from South Texas farmers. Tuma said the lakes are at 846,000 acre-feet, so water will be cut off to farmers in the Garwood district, northwest of Galveston.

“We have been communicating with the farmers in Garwood for months, so this should not be a surprise,” Tuma said. “The combined water storage has gone up 50,000 acre-feet this winter. An acre-foot is just a little less than 326,000 gallons, so that’s a significant amount of water, but the lakes remain less than half-full, so the drought is by no means over.”

Tuma said Lake Travis is 39 percent full and Lake Buchannan is 45 percent full, and the amount of rain needed to fill the lakes is hard to predict because other conditions must be taken into effect.

“There can be a lot of rain, but if it does not fall somewhere where it can drain into the lake, it will not increase the lake level,” Tuma said. “Soil conditions are another factor that play into the water’s ability to reach the lakes. Don’t get me wrong, we need rain everywhere to help this drought, but not everywhere will help the lakes.”

Farming is not the only industry affected by the low water levels. Riviera Marina president Steven Allen said the low water level of Lake Travis has effected business and become an expense because the marina has had to relocate to follow the receding shoreline.

“The drought has affected every marina on the lake and every business around the lake,” Stevens said. “Not to mention Austin and the surrounding cities. Not many people think about the effects on businesses outside of Lake Travis, but it is huge. People come to Austin for the lakes and the music.”

Stevens said business was good last summer but not great, and he is hopeful that wet weather predicted for the spring will help business for the upcoming summer.

“2012 could be a devastating year for businesses on or around Lake Travis if we don’t gain 20 feet of water at a minimum,” Stevens said. “This summer will depend on the rain. We will see.”

Nutrition sophomore Meredith Furst said she grew up on Lake Travis and her family still owns a boat there, so the drought has created a hassle for the storage of their boat and has allowed for less time on the lake.

“It’s really sad, because we used to go out on our boat every weekend almost religiously,” Furst said. “We’ve had to change marinas because the water got so low our boat was just sitting on the rocks. The recent rain has brought relief to me, but the lake is so low it’s pretty much going to take a monsoon to get it back to normal.”

Printed on Thursday, March 1, 2012 as: Lakes continue to suffer drought despite rain