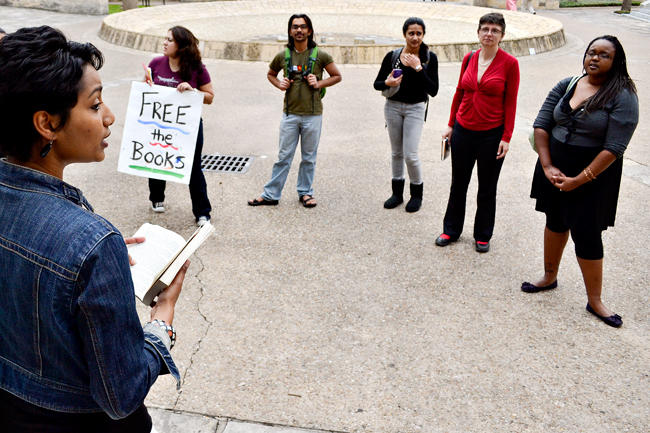 Sheela Jane Menon, graduate student in English, reads a selection from Bless Me Ultima, by Rudolfo Anaya, in a read-in Wednesday on the West Mall. The event was hosted to protest the banning of books in an Arizona public school district as well as to fight for the continuation of ethnic studies at UT.

Beneath an umbrella next to a sign declaring “Knowledge is Beautiful,” anthropology and Plan II senior Rashika Pedris read an excerpt from Henry David Thoreau’s “Civil Disobedience” Wednesday morning as part of a protest against the ban of books in a public school district in Arizona.

Along with 11 other universities, students and faculty at UT held a read-in all day on Wednesday at the West Mall to protest the banning of books and the termination of a Mexican American Studies class in a Tucson school district. The read-in was also geared at fighting for the continuation of ethnic studies curriculum at UT, something which assistant English professor Snehal Shingavi said funding for has been cut back in recent years. Despite occasional rain showers throughout the day, 38 student and faculty members read excerpts from the banned books to protest the Tucson Unified School District’s decisions. Shingavi said there have also been attacks on the legitimacy of teaching ethnic study classes at the university level, which was another reason to hold the read-in.

“Over the last several years the university has slowly shrunk the budget for ethnic studies on this campus,” Shingavi said. “We’re trying to reassert the idea that these stories are marginal and excluded and have always been at the edges of what the University considers to be meaningful. But that is no reason to exclude these stories, because they’re important in understanding what America actually is.”

Pedris, who read the excerpt of Thoreau during a rainfall, said having ethnic study courses were important at all levels.

“I think there is this view that Americans have one solid history and that is just not the case,” Pedris said. “We keep talking about being the home of the free and the brave, and those free and brave come from a variety of backgrounds. I think it is important that we learn as many different kinds of history as there are.”

Shingavi said the reason for the book ban in Arizona and the attack on ethnic study curriculum was probably to hide the darker side of American history.

“There is a kind of fear that many have on the political right about ethnic studies of challenging this notion that America is the pinnacle of democracy and civil rights globally,” Shingavi said. “American history is normally the triumph narrative of white settlement in America, the rise of an industrial class, the growth of American power globally. The ethnic study narrative is a different narrative.”

Shingavi said ethnic studies classes provide a viewpoint on groups who had to fight for their legal rights.

“It provides a real texture for those of us who contend with the contemporary legacy of exclusion, discrimination and lack of civil rights,” Shingavi said.

Saloni Singh, Plan II honors and biology senior, read an excerpt from Luis Alberto Urrea’s “The Devil’s Highway,” a book about deaths on the US-Mexico border. She said ethnic studies in the United States could not be separated from immigration studies.

“Almost all the groups exist in the United States were at one point descendants from immigrants,” Singh said. “I think ethnic studies, especially in places like Arizona, are critical for the appreciation of migrants and migration, why people come here and what lengths people go to come here, despite adversary and danger.”