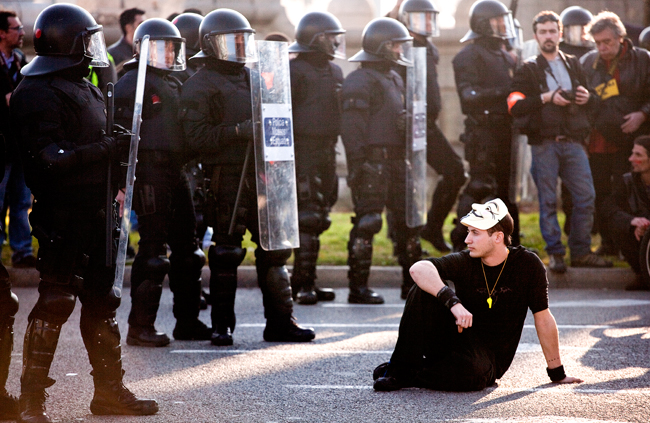 A demonstrator sits on the ground as riot police officers stand guard next to the Mobile World Congress during a protest in Barcelona, Spain, Wednesday, Feb. 29, 2012. Spanish students in Barcelona clashed Wednesday with police and set fire to garbage containers during nationwide protests against education spending cuts.

BARCELONA, Spain — Tens of thousands of students protested education spending cuts in big cities across Spain on Wednesday, and the demonstrations turned violent in Barcelona as angry young adults clashed with police.

Riot police charged a crowd outside the stock market in Barcelona, Spain’s second largest city, after protesters who broke away from a peaceful rally numbering thousands threw rocks and other objects.

Video in Spanish media showed protesters setting plastic garbage containers alight with flares, causing a blaze that destroyed at least one car. They also hurled rocks at the glass front door of a bank branch.

Some students made their way to the University of Barcelona and took refuge from riot police in a plaza inside the campus, denying that they started the violence. Student Pau Bronsoms, 22, said police used truncheons to hit protesters and fired rubber bullets.

“We did not expect this degree of repression,” he said. “Nobody broke anything until they charged.”

A regional police official in Barcelona declined comment on tactics used to break up the demonstration, speaking on condition of anonymity because of department policy.

Spain is in the midst of a deep economic crisis, with the unemployment rate for people ages 16-24 at nearly 50 percent.

Many young adults fear they have no future in the country and are angry at the new conservative government of Prime Minister Mariano Rajoy, which is enacting widespread austerity cuts to prevent the country from being forced into a bailout such as those taken by Greece, Ireland and Portugal.

Large protests also took place Wednesday in Madrid and Valencia, but there were no reports of violence.

The Barcelona protesters regrouped late in the afternoon and marched to the sprawling convention center hosting the Mobile World Congress, an annual cellphone trade show event that is the world’s largest.