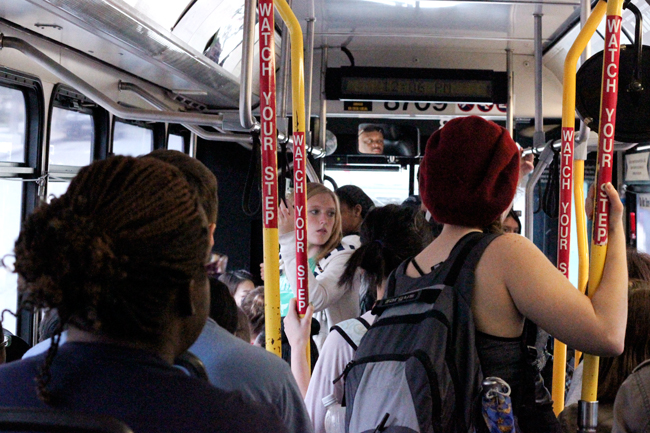 Students stand on a full 40 Acres bus Thursday morning. Capital Metro is trying to ease concerns about overcrowding on the UT shuttles and city buses.

Despite limited funds, the Capital Metro transit system is attempting to ease concerns of overcrowding on UT shuttles and city buses.

Capital Metro, the system that runs UT’s shuttles and city buses, gave rides to one million more people in 2011 than in 2010, Capital Metro spokeswoman Erica McKewen said. McKewen said there are 400 buses and shuttles driving 83 routes around Austin and the number of buses has not changed in spite of the increase in ridership. There city does not have funds to add more buses currently, she said.

“More people are choosing to ride the bus for a variety of their own reasons,” McKewen said. “Most are turning to the buses because of increasing gas prices, but some are trying to go green, save money or are just tired of the stress of dealing with traffic every day.”

“The study let us know how we can get more bang for our buck,” McKewen said. “We had a consultant come in and look at the biggest Austin destinations so we could better utilize the resources we already had.”

“It’s a challenge to grow with a community and live within our means, but we are doing the best we can,” McKewen said.

“We will never be able to provide a service that works out perfectly for every single person, but we are doing what we can for the majority of people.”

Sometimes, however, the company’s best efforts are not enough to solve overcrowding problems.

Anthropology senior Nazia Hussain said she lives in West Campus and has been late to class because the bus was too full.

“I always go to my bus stop an hour before my class starts because there’s a chance the bus might be too full and just pass me,” Hussain said. “The bus has passed me before and I knew I didn’t have time to wait for the next one, so I panicked and didn’t know if I should start walking or risk being late.”

Hussain said when she does make the bus, it’s usually an uncomfortable ride because it is so crowded.

“I’m always in someone’s armpit,” she said. “Then when we get to my stop, it’s a struggle to fight the crowd to make it off before the bus starts going again.”

Chemical engineering senior Uzair Alaidroos said he is frustrated when he sees a full bus followed immediately by empty buses.

“I think it’s weird how one bus will be super full and then the next three will be empty,” Alaidroos said. “When they’re all next to each other like that it messes the schedule up and causes people to wait longer. It’s so annoying.”