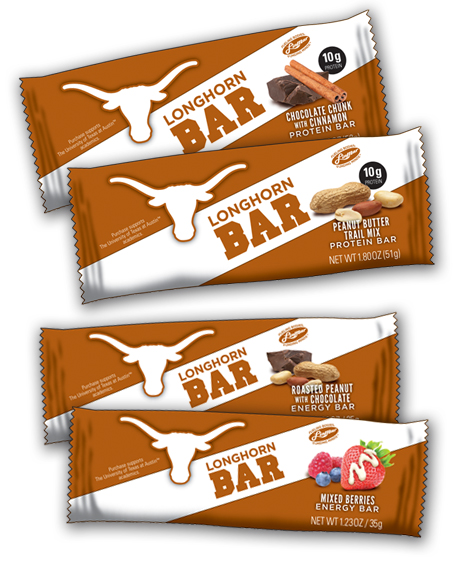 Longhorn Bars, a brand of energy and protein snacks, was created by two Texas Exes in November. Twelve percent of the products royalties are given back to the University. (Photo Courtesy of LinMar Partners)

With an interest in helping the University and providing healthy food, two Texas Exes members created a brand of energy and protein bars that has gained momentum since its launch in November 2011.

Martha Smiley, co-founder of Longhorn Bars and UT Law alumna, began discussing the idea of the Longhorn Bar in 2010 with co-founder and UT alumna Linda Addison. Smiley said offering a healthy snack to Longhorn fans, while helping fund future Longhorn educations, was the idea behind their invention.

“We liked the idea of working on the behalf of the University and were interested in healthy food choices for people and understood the power of the Longhorn brand,” Smiley said.

Smiley said the Longhorn Bars product had to attain a license in order to use the Longhorn brand and, once that license was approved, an agreeable percentage of the product’s proceeds had to be returned to the University.

“We decided to give back 12 percent of our product’s royalties to the academic side of the University because public universities have been under such public funding pressure in the past few years,” Smiley said.

Christopher Kennedy, operations manager for Longhorn Bars, said the snack is now being sold in approximately 80 locations in Texas, including campus convenience stores and the University Co-op.

“It’s a really good tasting bar and the convenience of finding it locally, whether in Jester Center or Cypress Bend Café, is a healthy and affordable option that you don’t have to go far to get.”

Kennedy said a plan to stock Longhorn Bars on the shelves of more retail stores is in the process.

“We’re looking to have Longhorn Bars at Academy Sports and Outdoors and just looking for the next drugstores and convenience stores to carry the bars,” Kennedy said.

Susan Hochman, University Health Services manager, said Longhorn Bars would be included in the “Safe Spring Break Kits” that will be handed out in the West Mall the week before spring break as a way for students to stay energized.

“To keep energy levels up during the day, we encourage students to snack,” Hochman said. “We don’t label any foods as ‘good’ foods or ‘bad’ foods, but we do stress the importance of moderation and variety in what students choose as snacks.”

Hochman said including these snack bars in the kit will be a way for students to grab breakfast on the go.

“We stress the importance of eating breakfast every day, but our research shows that many students skip it because it’s hard to squeeze it into their schedules,” Hochman said. “They tell us they’d be more likely to eat breakfast if they could just grab it and go and many ‘bar foods’ fit the bill for both snacking and a portable breakfast.”