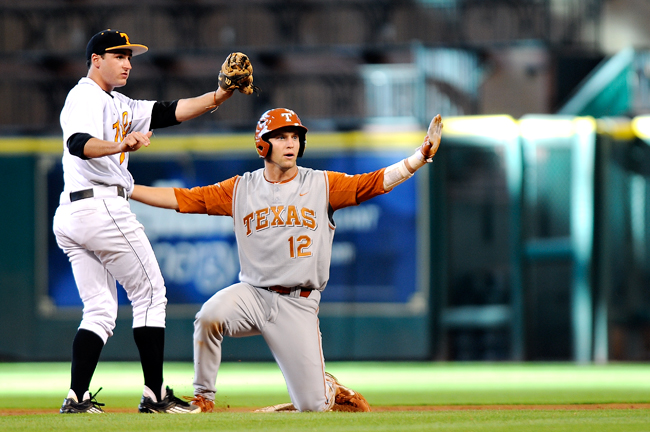 Jacob Felts, 12, looks to the umpire for a call at second base.

Texas' weekend at the Houston College Classic started out well with an upset win over No. 5 Rice on Friday, but the rest of the three game set didn't go as planned.

No. 21 Texas (4-7) dropped its next game 5-4 to an unranked Tennessee (8-2) squad after its late inning rally came up short, and on Sunday Texas fell to another SEC team, No. 4 Arkansas.

Coming into the three-game-set the Longhorn offense had been stagnant. As a team they were hitting only .195, but against the Owls (9-1) the bats woke up and the team exploded for 11 runs to pace the team to an 11-8 win.

The two schools came into the fifth inning in a 3-3 tie, but that’s when the Texas strategy of manufacturing runs went into full swing, as they punched six runs in the inning.

Center-fielder Tim Maitland got the inning started with a bunt single. From there, Erich Weiss singled and then Jonathan Walsh moved the runners over with a sac bunt. Alex Silver then came to the plate as a pinch hitter and came through with a double to right scoring both runners, putting Texas ahead 5-3.

After an out, Jacob Felts walked to bring Jordan Etier to the plate. Etier, who had been hitless on the season up to this point, delivered with a triple to left center field to score both runners. Brooks Marlow and Maitland both came up later in the inning and hit an RBI single to complete the inning.

Texas gave up a few runs after that point, but the Owls were never able to mount enough of a comeback suffering their first loss of the season to the Longhorns.

That momentum could not be sustained, however, as the team fell behind quickly to Tennessee on Saturday. They got so far behind in the first, allowing four runs, that they could not find a way to crawl back against a team they should have beat — at least on paper.

The four run deficit held up the whole game, until the ninth where a two out rally brought Texas to within a run at 5-4. But with a runner on third, sophomore Mark Payton popped out to second to end the game.

On Sunday, Texas was looking for a win to give it a positive record at Minute Maid Park. But it wasn't meant to be, as the Razorbacks jumped ahead of Texas early with two runs in the first. Texas came back to tie the game scoring a run in the second and the third innings. But then Arkansas' bats started finding gaps and they scored four runs in the fourth inning to move ahead of the Longhorns for good.

Arkansas would score an additional run in the fifth to move ahead 7-2 and the Longhorns would push across a runner in the sixth to cut the lead to four. But the comeback wasn't to be, as they fell 7-3.