SXSW brings style to the scene 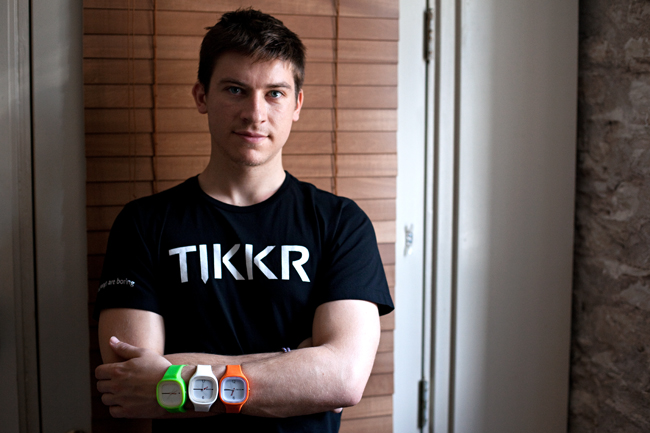 TIKKR watch designer Cory Stout is one of the 55 designers being featured at SXSWs second annual tradeshow, Style X. The TIKKR booth will also feature a live mural painting by artist Just Pierce, who collaborated with the company on a special edition watch.

SXSW’s second annual tradeshow, Style X (pronounced “Style By”), is going to set style loose in the Austin Convention Center with 55 designers and eight panel discussions. Co-founder Joah Spearman hopes this free event will bring the world of fashion back down to earth and symbolize the fashion world’s future.

“The other fashion industry events like New York Fashion Week are very industry-focused and very elitist,” Spearman said. “They give off the air of exclusivity that the online world does not allow for. We want to embrace the future, not live in the past.”

Style X’s panels will feature representatives from favorite Internet fashion destinations like Refinery29, The Man Repeller and Huffington Post Style to facilitate discussions on fashion’s newest trends both on and off the runway.

The tradeshow will also feature fashion shows with SXSW musicians as models, a personal shopper service and on-site vendors. From local favorites to under-the-radar designers who have traveled miles to celebrate style, these featured designers are just a taste of what’s to come at Style X.

TIKKR
For candy-colored watches in 23 different hues to choose from, TIKKR brings a new meaning to arm candy. Though the brand is known for its signature square watch faces, TIKKR “Chief Time Keeper” Cory Stout promises the brand is anything but square.

“We are based in Austin and our style is cool, clean, funky and fresh,” Stout said. “Last year, we showed our watches, but this year we want to show our personality.” TIKKR’s booth will also feature Arizona artist JPierce painting a booth mural live in living color.

Krochet Kids
All of Krochet Kids’ southern California-influenced crochet hats are handcrafted by formerly impoverished women in Uganda and Peru, and each woman signs her name on a tag sewn inside the hat. The progressive company takes partial product proceeds to charity a step further by allowing customers to virtually meet the women who made their hats on their website.

“When you buy a hat, you change a life,” spokesperson Nic Lauten said. “You can see the change happening because of your purchase.”

Sanctuary Printshop
One of Style X’s co-founders, Jon Pattillo, co-owns this design house responsible for the signs, logos and apparel of Austin restaurant Bacon, the famous Gruene Dance Hall and the Alamo Drafthouse. Sanctuary Printshop will be printing apparel at their booth with custom SXSW designs. Proudly based in Austin, the print shop expects this year’s event to top last year’s inaugural Style X in a big way.

“Austin is continuously becoming more of a fashion-forward city, and Style X provides an opportunity for festival-goers to explore up and coming trends,” Sanctuary Printshop’s publicist Lindsay Reese said.

Kendra Scott
Austin’s own fashion celebrity, Kendra Scott, has literally made a name for herself with her jewelry. In addition to her Texas and California stores, Scott’s jewelry is sold nationwide in Nordstrom and Neiman Marcus department stores. Scott’s signature jewelry pieces shimmer brightly and swing happily with each step. Kendra Scott is making her Style X debut with a booth and by sponsoring the jewelry for the runway shows.

“Our jewelry is for that vivacious, fun woman who wants to express her style through bold, colorful accessories and isn’t afraid to turn heads when she walks in a room,” Scott said. “I feel incredibly lucky to be based in a beautiful city that thrives on individuality and creativity, and I often find inspiration right here in Austin.”

By Samii Ryan
By Samii Ryan’s hair and head accessories are the epitome of bohemian style and offers a hint of everyday whimsy. From delicate headpieces to elaborately feathered earrings that laugh in the face of skimpy and out-of-date feather hair extensions, accessories designer Samii Ryan always thinks outside of the jewelry box. Based in Bethlehem, PA, items from the modern take on a hippie accessories’ line have been spotted on celebrities like Ke$ha, Miley Cyrus, Demi Lovato and Lucy Hale.

“Last year was my first year at SXSW, and it is something so magical and amazing,” Ryan said. “I’m excited to showcase the line, in particular the headbands and headchains that are brand new to my line.”