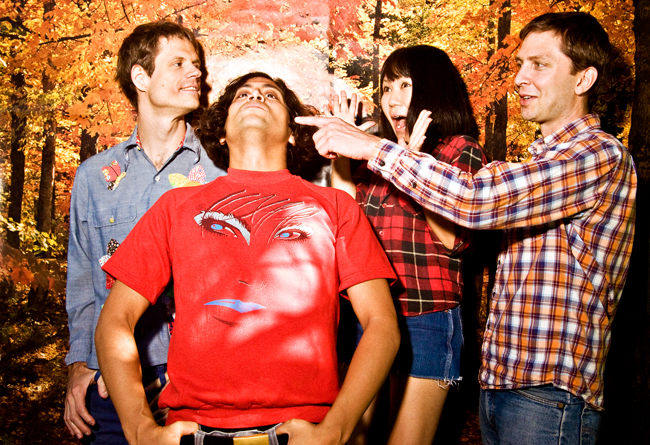 It would not be an overstatement to say that band names that begin with the word “deer” have their own special place in the rock music spectrum. Avant-garde, anything-goes rock band Deerhoof holds their own in the special deers-only section that includes Deerhunter and Deer Tick; it’s a strange blend of distortion, frenetic drums and lead singer Satomi Matsuzaki’s child-like delivery that separates them from other deer-friendly groups.

Deerhoof’s 18-year career can be summed up in two parts: distance and experimentation. The members, who all used to live in the San Francisco Bay Area, have since relocated to different places. It’s proof of the band’s long-lasting chemistry that in between all of the joyous calamity, you can sense the group’s reliance on one another. They mesh their own world into each other’s to create a universe that, upon first listen, you can’t help but be hooked.

Guitarist John Dieterich spoke with The Daily Texan about the distance between members, influences and future plans.

The Daily Texan: You guys will be coming through for South By Southwest, and then doing a tour with Of Montreal and Kishi Bashi. How does it feel to be back on the road?
John Dieterich: It feels good. It’s always slightly nerve-racking when we haven’t played for a while. But we’re going to have a few days to work on things here in Albuquerque. We’re in the process of working on a new album, so a lot of our energy is focused on that. It’ll just be good to make noise in a room together again.

DT: Do you feel that not having played with one another for a while and the distance between everybody makes the songwriting process more challenging?
JD: To be honest, it’s always difficult for us, getting together and working out the music. The part that is the hardest is that it’s more of a challenge to get in the same room. We never know if — when we get back together — if we’re going to know how to play. After a couple days I’m like, ‘Oh, what was I worried about?’ but there’s always this fear that we can no longer play our songs.

DT: You guys have opened up for an assortment of bands including The Roots, Bloc Party and the Yeah Yeah Yeahs. How is it looking back and seeing your music has struck a nerve with these groups from different genres?
JD: It’s always very humbling. It’s always a surprise when I hear that someone has listened to our music. It’s just a shock that what we try to communicate is heard by, and even reinterpreted by others. Music is the philosophy through which I see the world, and it’s great to be a part of that musical conversation.

DT: Are there any bands you hope to catch while you’re here and any fond memories of performing in Austin?
JD: We’ve played SXSW a couple of times. This’ll be our first time in several years playing several shows. Usually for past SXSWs we’ve just done like one show. I have no idea of what is happening yet, but I know we’ll be able to see some other bands. We’re going to be running around like crazy. As for a memorable moment in Austin, we actually played with a local group called The Weird Weeds. They’re good friends of ours, and if we get the opportunity to see them, that’d be very exciting.

DT: What’s next for you guys after SXSW? I know you already mentioned recording.
JD: We’re in the midst of [recording]. We’ve been writing all separate from each other, so some of what we’re working on will be what we end up recording. Basically we’re going to do the tour with Of Montreal, and then we’re going to have several days in Portland where we’re just recording over there.