Divers build off of solid season, prepare to qualify for diving championships 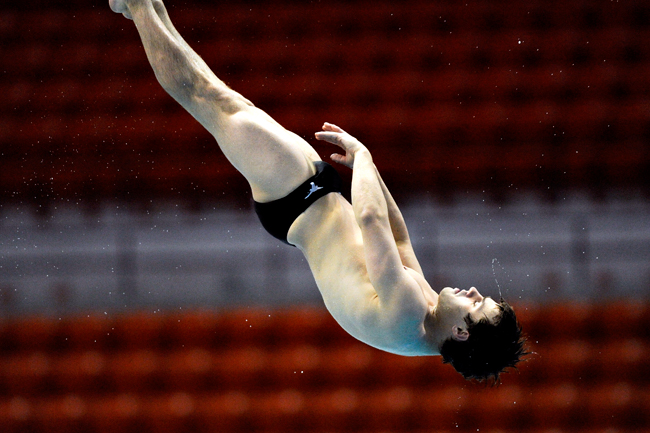 Senior diver Drew Livingston dives during a practice in February.Livingston is a four-time All American and also owns an NCAA title.

As the 2010 NCAA men’s swimming and diving championships were drawing to a close, the Longhorns were in a tough fight for points to claim the top spot in the country.

With the swimming events completed and UT’s prospects looking strong as the meet drew to a close, the hopes of claiming the 10th national title in Texas history rested on the backs of two sophomore divers.

With this lofty goal hanging over their heads, Matt Cooper and Drew Livingston ascended to the platforms and looked to secure a victory for their team.

“We didn’t really say anything to each other, but we knew that if we just [made] diving finals, our team would win the championship,” Livingston said.

The two earned enough points, with Cooper finishing third and Livingston in seventh to lock up the 2010 title for the team. Sophomores at the time, Cooper and Livingston are now finishing up stellar senior campaigns that have produced impressive results.

Cooper claimed victories in the 1-meter dual against both SMU and Auburn and earned the top spot in the 3-meter against Georgia. Livingston came on strong at the end of the season at the Big 12 Championships, claiming titles in both the 1-meter and the platform competitions.

Starting Thursday at the Zone D Diving Championship, the two seniors, joined by fellow Longhorn freshman Ryan Anthony and sophomore Will McCraney, will embark upon a path to qualify for the NCAA championships and put themselves in positions to help No. 2 Texas earn another national title.

The Zone D meet will take place in Iowa City, Iowa, and is one of five zone meets around the country occurring this weekend. These zone meets provide opportunities for divers to post qualifying scores for the NCAA championships, occurring March 22-24. Participants in each zone attend the designated meet for their respective geographical region. Each zone is allotted a certain number of qualification spots for the NCAA championships. Zone D is the largest in the country and has nine spots available for men. By bringing in four divers, Texas has good odds of sending qualifiers to the NCAAs. However, the quest won’t be an easy one. Competing against the Horns for these spots include divers from No. 25 Missouri, No. 18 Texas A&M, No. 16 Minnesota, No 14. Iowa and several other universities.

If Texas is to win its 11th national title, it will need strong performances from its divers this weekend.

Printed on Thursday, March 8, 2012 as: Divers in search of 12th title, begin preparation for Zone D