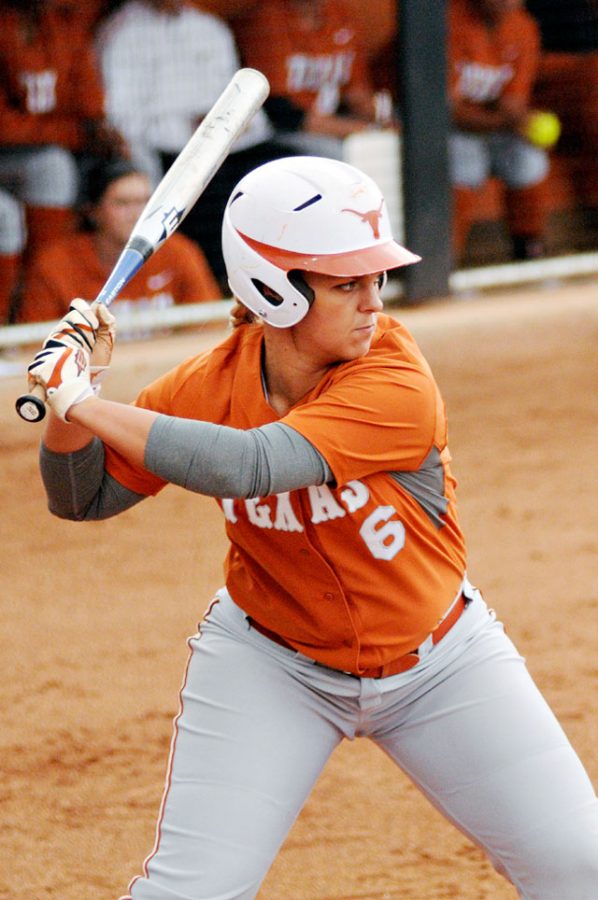 Junior utility player Taylor Hoagland (6) prepares for an at-bat in a recent game.

Going into their first conference series of the season against Texas Tech, the Longhorns knew they had something special in Lexy Bennett, but that was solidified Wednesday morning. The senior out of Kingwood was drafted No. 3 overall in the National Pro Fastpitch league.

Bennett, one of three senior captains, has been a key asset throughout the whole season. She is currently batting .528 on the season with five home runs, 32 RBI and six stolen bases. With those numbers, she leads the Big 12 in batting average and RBI. Her entire career at UT she has a .387 batting average with 36 doubles, 28 home runs and 130 RBI.

The second baseman will go down as one of the best softball players here at Texas. She currently holds the school career record for batting average and on-base percentage. On top of this she needs only nine more RBI to tie the school record for RBI and is currently only the fifth player in school history to record 200 hits or more in her career.

Bennett was drafted to the Akron Racers out of Akron, Ohio in Wednesday’s draft. The team, which has been in the league, came in second place overall last season and looks to get to that top spot with the help of Bennett. The Racers are the oldest team in the league and are going into their 11th season this upcoming June, when Bennett will be there helping the team to a championship run.

“Bennett’s versatility in the infield makes her very valuable,” said the Racers owner Joey Arrietta. “From first base to second to shortstop she has performed flawlessly in every position. She is fluid, she’s graceful, she is the real deal. And she brings a big bat.”

The veteran player, who loves the family atmosphere and fans here at UT, has been a big part of the Longhorns’ success this season. In the conference opening series against the Red Raiders, Bennett drove in the essential game-winning run in the second game to give the Longhorns their 19th win. In many other games she has been at the top of the stats list, hitting in and scoring runs for the Longhorns.

As she finishes her last season here at Texas, she is making it her best yet and propelling her team in the rankings. The No. 6 Longhorns have all looked up to the senior and will continue to as they bid a run at the Big 12 and national championship.