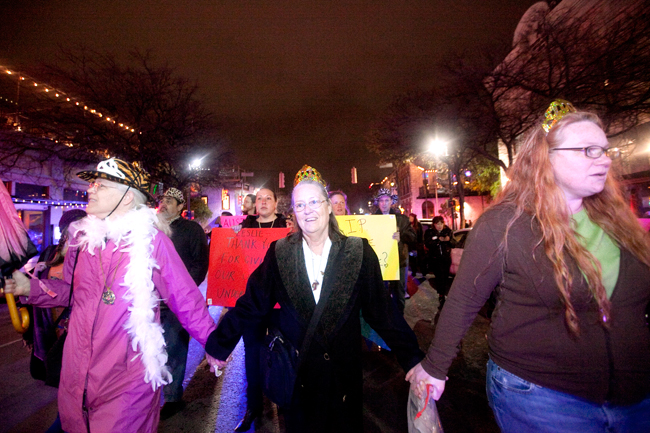 Austin has lost a public figure and homeless hero who provided the city some of its weirdness.

“He was very much at peace before he died,” Russell said. “We told him about how the whole city was supporting him and he gave us a thumbs up.”

Many think the homeless hero was the embodiment of the “Keep Austin Weird” slogan. Leslie was best known for his eccentric cross-dressing and often wore heels and a leopard thong as he walked down Congress Street or visited friends at local stores in South Austin.

Leslie first moved to Austin in 1996 and quickly became a popular figure. Tourists constantly asked to take pictures with him, and he would happily oblige. He brought attention to police treatment of homeless through his outspoken criticism which he used as a qualification during his three stints running for mayor. He appeared in a Super Bowl halftime commercial and had his own line of refrigerator magnets.

He is survived by two sisters, a brother and nieces and nephews.

Austinites are invited to a public memorial service Sunday at 2 p.m. at Auditorium Shores. Leslie’s family will have a private ceremony and burial.

Despite the unexpected rain and cold, a few dozen friends and strangers gathered at City Hall Thursday night for a memorial parade in honor of Leslie. They wore some of Leslie’s signature accessories, including boas and colorful hats. Some even cross-dressed as they walked toward one of Leslie’s famous spots on the corner of Congress and Sixth Street.

Blythe Plunkett of Mobile Loaves and Fishes, an outreach ministry for the homeless, said Leslie was a catalyst for her work with the homeless.

Plunkett and Leslie met 12 years ago when he spent his days on Braker Lane. Plunkett said Leslie’s demeanor in spite of his situation opened up her eyes to what the real world is like for the homeless.

“He was a very kind person who used to accompany two girls on the bus to keep them safe,” she said. “I’ll always remember him setting up his living room on Sixth Street and showing the world to be true to themselves.”

Oliver Steck, a friend of Leslie, wore a dress in honor of him during the memorial parade. Initially at a loss for words to describe him, Steck said Leslie was the epitome of the idea that appearance is not everything.

“Leslie defied our perspective on the homeless in a different level with his good nature,” Steck said. “He was far more courageous than the rest of us and did very human work everyday.”

In the last few years, Leslie garnered so much fame that he even had his own smart phone application. Users can hear Leslie on their phone through “iLeslie” that includes various recordings of some of Leslie’s phrases.

“They don’t know what they’re missing,” Leslie says in one of the sound-bites.

For many, it is strange to imagine Austin without Leslie, while others will never even know an Austin with Leslie, but as the local icon said himself, they will never know what they missed.