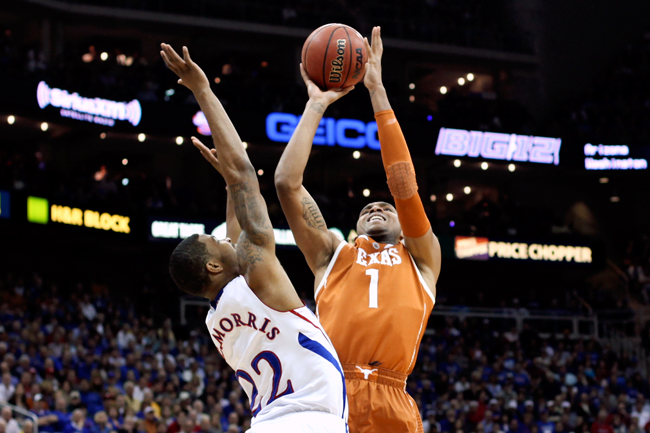 No team from the state of Texas has ever won the Big 12 Men’s Basketball Championship.

That’s right, the state with the most teams in the conference has never had a school crowned tournament champion.

And barring a miraculous run by either Baylor or Texas, the streak won’t end this weekend.

Sure, there have been regular season champs from the state, but neither Texas, Texas A&M, Texas Tech nor Baylor has ever won the conference tourney in the 15 years since its inception.

Longhorns head coach Rick Barnes doesn’t believe there’s any concrete reason behind this simple fact. For him, it’s all about timing.

“We try to read too much into it,” he says. “The bottom line is the team that has won the tournament, they’re the best team. Normally, the team that wins is playing the best basketball at that time.”

It’s not like teams from Texas haven’t come close to winning it all, however.

Baylor lost to Missouri in the 2009 finals and Tech succumbed to OSU in 2005.

Texas advanced to six of the last 10 Big 12 tournament finals since 2001, including a season ago when they lost to Kansas. But the Jayhawks bested the Longhorns all four times they’ve met in the championship game, including a three-year stretch from 2006-2008.

OSU and Oklahoma are the other two teams to deny Texas a Big 12 championship.

“We’ve been to a couple of those finals,” Barnes said. “I think back to the one against Oklahoma State [in 2005]; that was probably the best played game against us when they had the [Graham] twins. Those guys were awesome that day.”

Perhaps the answer lies in the tournament’s location.

The Big 12 tournament is in its 16th year. Kansas City hosts the conference championship this year for the 11th time. And it will stay there for at least the next two seasons.

Kansas has won the tourney six times in Kansas City.

Missouri’s campus in Columbia is just a two-hour drive away from the border town. The Tigers have three players from Kansas City on their roster and MU expects to get a boost from a largely pro-Tigers crowd at the Sprint Center.

“We’re home,” said senior Missouri guard Kim English. “This is our city, so we’re definitely happy to be back home.”

But Barnes doesn’t believe that tournaments held outside Texas puts teams from the state at a disadvantage.

“By this time in the year I don’t think that stuff affects players,” Barnes said.

Dallas hosted the tournament three times from 2003-2006 and Texas advanced to two of those finals.
The bidding for the tourney’s location will return soon, and it could be on the move again.

“I think there are other cities that want to have it back,” Barnes said. “Oklahoma City did a good job with it. Dallas would like to have it, I’m sure. Kansas City does a great job with it. I’m sure people will bid for it. We’ll see who wants it the most.”

But location aside, it’s really all about who is playing the best hoops in March. More often than not, that team is the Kansas Jayhawks.

Kansas is the only team in the conference to win a championship in each of the three host cities: Kansas City, Dallas and Oklahoma City.

Kansas also has the most Big 12 titles with eight wins. The Jayhawks won each of the first three tourneys, then three in a row from 2006-2008. KU has won each of the last two tournaments and it looks poised to complete its third three-year run of titles.

The Jayhawks have won the tournament five times when they are the No. 1 seed, and they hold that spot again this year.

For now, it looks like the streak will continue into the next era of the Big 12. And the state’s chances don’t get any better next year with the addition of Big East powerhouse West Virginia.