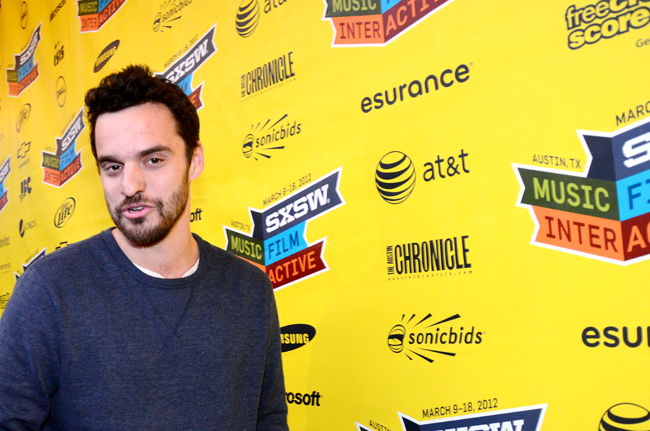 Jake Johnson walks the red carpet outside of the Paramount Theater where his movie, "Safety Not Guaranteed," was showing Saturday, March 10, 2012.

Girls Against Boys
Directed by Austin Chick
When “Girls Against Boys” opens with a stylish, tantalizing, and intense scene of Lulu (Nicole LaLiberte) seducing and killing a police officer, the film promises to be an interesting examination of gender politics. The film rewinds in time a bit to introduce us to Danielle Panabaker’s Shae, a co-worker of Lulu’s. After a particularly rough weekend, Shae and Lulu decide to get revenge on the boys who have wronged them.

“Girls Against Boys” has plenty of style, and director Austin Chick slips some fascinating gender imagery into the film amidst the blood spatter. The female leads are pretty solid as well, and LaLiberte in particular stands out as an edgy, terrifying succubus. Panabaker brings unexpected heart and nuance to her role, and the tenuous mix of fear and bloodlust in her eyes throughout is fascinating to watch.

Unfortunately, “Girls Against Boys” suffers on the scripting front. Chick, who also wrote the screenplay, has a good ear for dialogue, but the film’s story is thrown together, lacking a compelling story arc. The film’s message is also muddled, and whether it’s satire, feminist critique, or man-hating retribution, “Girls Against Boys” gets lost in itself too often. Nonetheless, it’s an interesting film and certainly worth checking out if only to put the terrifying Nicole LaLiberte on your map.

Killer Joe
Directed by William Friedkin
“Killer Joe” is one of the blackest comedies ever made, and it wears that distinction proudly. William Friedkin, along with screenwriter Tracy Letts (adapting his own play), has crafted a film that’s seedy, sleazy, and above all else, Southern, and it’s a hell of an experience. Emile Hirsch leads a great ensemble cast as Chris, a deadbeat looking to kill his own mother so he can get at her life insurance settlement. He and his father Ansel (Thomas Haden Church) hire Joe Cooper (Matthew McConaughey), a Dallas cop who moonlights as a contract killer, but when they can’t pay his fee in advance, Joe demands that Chris’s sister Dottie (Juno Temple) serve as his retainer instead.

From its first scene, “Killer Joe” is dipping the audience into pulpy, near-exploitative settings and situations, and the film’s script is fantastic, weaving a tangled web of despicable characters in inescapable situations, with dialogue that ranges from vulgar tension to eloquent Southern poetry. The film slowly builds, letting each character rack up a stable of frustrations with one another, and then lets all hell break loose in a lengthy, climactic scene set in Ansel’s trailer, an explosive sequence that wears the film’s stage roots proudly and eventually devolves into disturbing grotesquerie.

The cast chosen to bring “Killer Joe” to life is perfect across the board. Thomas Haden Church plays Ansel as a complete idiot, Emile Hirsch is appropriately slimy, and Gina Gershon is wonderfully fearless as Ansel’s second wife. Matthew McConaughey steals the show as Killer Joe, transforming his easy, magnetic charm into something far more sinister, his cool blue eyes taking on an icy, dangerous tint, and Juno Temple shines as the victim of Joe’s attentions. Temple’s Dottie is a little girl in a woman’s body, and as the film develops, Temple becomes the sole sympathetic figure with her daffy, innocent performance.

“Killer Joe” recently got slapped with an NC-17 by the MPAA, and while the film’s content may not quite warrant such a harsh rating, the disturbing sleaziness of the whole thing just about earns it. “Killer Joe” should wear the rating like a badge of honor, a signal of just how dark this movie gets, and judging from the woman passed out in the Paramount lobby just after the credits rolled, “Killer Joe” is a film that will be leaving people very shaken up for a very long time.

The film does not screen again at SXSW, but do not miss it when it hits theaters sometime this year.

The Last Fall
Directed by Matthew Cherry
There’s no denying that “The Last Fall” has an effective hook: the film, written and directed by former NFL players, deals with what happens when a football star’s career abruptly ends, leaving him with no job and no options. Unfortunately, Matthew Cherry mostly abandons the film’s premise in order to tell a story about Kyle Bishop (Lance Gross) returning home to reconnect with his family and win back an old girlfriend (Nichole Beharie).

“The Last Fall” is a story we’ve all seen before with a slightly original framing device, and Cherry fumbles every opportunity for dramatic tension or stakes. There’s no denying the film is heartfelt and it feels authentic at every turn, but it’s never interesting, the dialogue is flat and uninspired, and it’s full of clichéd characters in predictable situations.

Safety Not Guaranteed
Directed by Colin Treverrow
Ever since she landed a small role in “Funny People,” Aubrey Plaza has been carving out a deliberate comedic persona for herself, and “Safety Not Guaranteed” is both the ultimate manifestation and a challenge to the niche Plaza has been playing to for most of her career. Plaza plays Darius Britt, a magazine intern who’s assigned to investigate a classified ad seeking a partner for time travel. Her boss Jeff (Jake Johnson) and fellow intern Arnau (Karan Soni) come along, but Darius is the one that ends up undercover with the possibly insane Kenneth (Mark Duplass).

“Safety Not Guaranteed” is a film that manages to consistently surprise you. It’s quite funny throughout, and every character gets a chance to shine, never disappointing. Plaza emerges as the best performance here, and her scenes with Duplass are unexpectedly sweet, letting us get a look at a softer side of Plaza that’s just as convincing as her bitter exterior. The script’s strongest point is its character development, and every one of the main characters is multi-faceted and believable.

It’s best not to know too much going into “Safety Not Guaranteed,” and the film has lots of great surprises under its hood, all of them building up to a cathartic, fantastic payoff that leaves the film on a triumphant note. The film has a smart, nuanced script, a fantastic cast with likeability to spare, and is sweet and poignant in all the right ways.