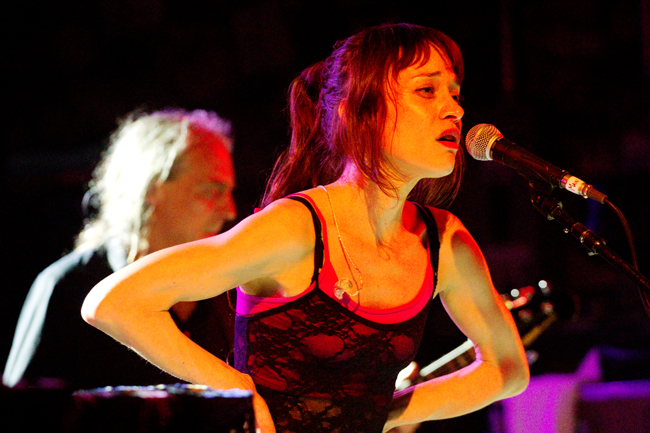 Fiona Apple performs at Stubb's as a part of the NPR Music Showcase Wednesday evening.

Wednesday showed a significant pick-up from the festivities offered on Tuesday. With a light breeze and free drinks galore, music fans and artists took to the streets of downtown in search of a good time.

Thrasher Magazine and Converse's Death Match event at the Scoot Inn kicked off yesterday. Skateboarders seeking refuge took to the Scoot Inn, where they were greeted with a mini-ramp and an assortment of acts including definitive hardcore punk act Cro-Mags. The event has become infamous for its anarchic atmosphere and unpredictability; last year Odd Future performed and had fans going wild as they jumped from just about everything in sight. Death Match 2012's debut was no less; from its chaotic moshpits to skateboarders eating pavement, the event's first day is a warm welcome to the unruliness that is expected to occur as the week goes by.

Bigger-than-life rock and roll group Foxy Shazam's performance at Waterloo Records outside stage was nothing short of spectacular. Notorious for their live performances, the band had no problem energizing fans as they went through old and new hits. "I Like It," a song that prides itself in glorifying the beauty of female voluptuousness, resulted in pure booty-shaking joy. As always lead singer and frontman Eric Nally epitomized showmanship. A staple part of his onstage persona, Nally requested multiple cigarettes from the audience, lit about five of them up, smoked them momentarily and proceeded to swallow them whole. Regardless of what was digested, Foxy Shazam put on a great performance that left listener's ears satisfied and full.

Wednesday also served as the return for songstress Fiona Apple, who performed her first SXSW show at Stubb's. One of the most anticipated performances of the festival, Apple's set proved that the contemplative and whimsical artist's talents have not gone to waste during her absence. The singer-songwriter debuted some new songs from her forthcoming album The Idler Wheel…, and had no problem pleasing fans with classics such as, "Criminal," "Fast As You Can" and "Sleep to Dream." Apple kept her performance direct and to the point; occasionally she would joke with the audience about not remembering verses to her new songs, but undeniable charm and charismatic stage persona made for an unforgettable show.