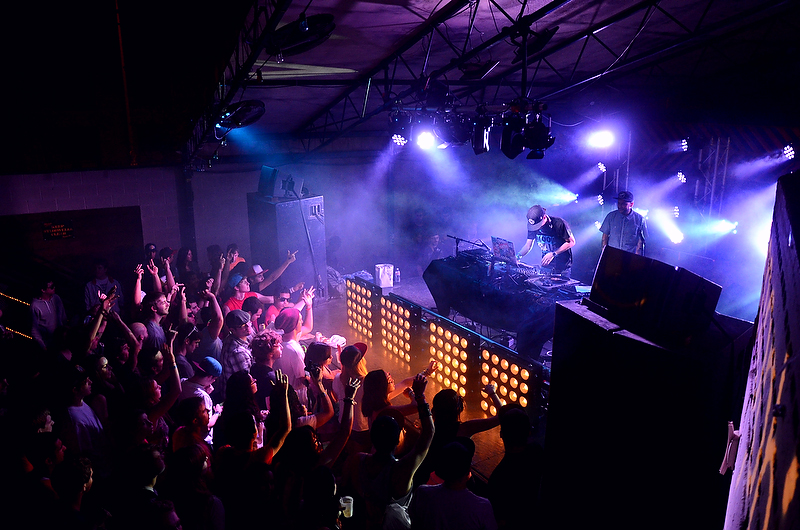 Codes, a dance music DJ, begins the SXSW showcase presented by AM Only, an electronic music booking agency, at Mohawk on Friday night. The 10-day film, interactive, and music festival came to a close during the early morning hours of today.

The growth of South by Southwest over the past few years has presented problems for law enforcement officers as the event has spread farther across the city, said Austin Police Department representative Raul Munguia.

“SXSW used to be a predominantly downtown event, but the number of venues west of Interstate-35 has been growing rapidly over the past few years,” Munguia said. “Protecting citizens and visitors during SXSW used to be primarily an effort of [APD’s] downtown sector. Now it is a department-wide effort.”

Munguia said APD officials have experimented with several new policies and procedures this year to combat the growth of the festival and keep attendees safe. He said officers worked three and a half days out of the week and were off for the others. This allowed department officials to be more rested than they have been in years past. They were also required to have access to the department’s radio system and to be on call for the entire week.

“We feel that increased presence on the streets can go a far way towards preventing crime and stopping disturbances before they even happen,” Munguia said.

He said the EMS, Code Enforcement and APD offices were moved to a centralized location, the Department Operations Center at the police headquarters, for the week, which allowed greater cooperation between the departments. He also said safety officials relied heavily on the new system of 29 security cameras, which were set up downtown last September.

“Of course there have been minor glitches, but we feel that this has been a very efficient way of operating,” Munguia said. “By comparison, SXSW has been very tame this year.”

Munguia said hotel burglaries and stolen wristbands were among the most prominent criminal incidents during SXSW. Police recovered stolen possessions from the hotels by using tracking software within some items. However, Munguia said as SXSW grows it becomes harder for police to prevent these types of problems.

Munguia said police reacted quickly to the theft of the wristbands, deactivated the microchips inside the bands and notified the public of the bands’ serial numbers. Regardless, he said there is an aspect of inevitability to the fights, assaults and thefts that happen during SXSW.

UTPD officer Darrell Halstead said the “spring break” and “SXSW” mentalities can cause students to put themselves in particularly dangerous situations.

“People feel like they need to get intoxicated or get high in order to enjoy a band,” Halstead said. “It’s for this reason that we see the obvious crimes such as DWI’s and public intoxication. What we don’t always hear about are the crimes such as sexual assaults.”

Radio-television-film junior Meryl Goodwin said she volunteered on the SXSW registration and utilities crew this year.

“I had a friend I volunteered with who was sexually assaulted by a group of drunken men as she was trying to walk past to a show by herself,” Goodwin said. “I was also at a rap/dubstep show and there were a group of high school girls in front of me snorting coke off of their phones. They had to leave the show early too because one of their friends was sick. And of course there’s always people smoking weed. But I think that’s pretty common at any show you’ll go to.”

Despite everything she witnessed, Goodwin said she felt relatively safe during SXSW.

“This year’s SXSW definitely had more people. I’ve been for the past three years and I had more issues trying to get in to shows than in years past,” Goodwin said. “But I think the national aspect is what makes SXSW so special. Bands and people come from all over the world and it’s a chance to show how great Austin is and meet and learn about new bands.”