Charges in Afghan shootings expected within a week 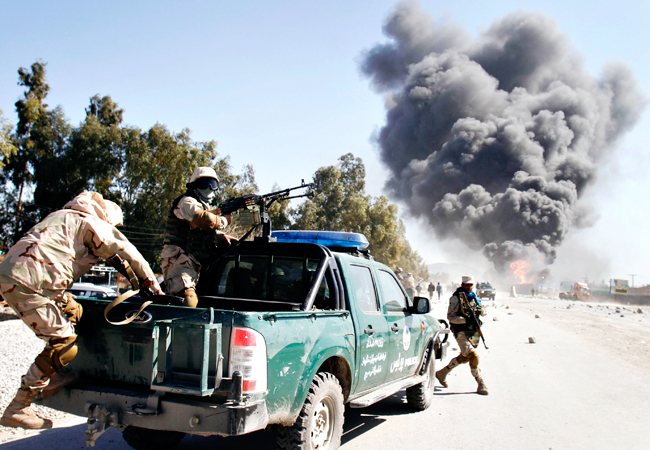 Men stand next to blood stains and charred remains inside a home where witnesses say Afghans were killed by a U.S. soldier in Panjwai, Kandahar province south of Kabul, Afghanistan, on Sunday. An Afghan youth recounted the terrifying scene in his home as a lone U.S. soldier moved stealthily through it during a killing spree.

KABUL, Afghanistan — Charges against an American soldier accused of killing 16 Afghan civilians are expected to be filed within a week and if the case goes to court the trial will be held in the United States, said a legal expert with the U.S. military familiar with the investigation.

Army Staff Sgt. Robert Bales is suspected of leaving a U.S. base in southern Afghanistan, entering homes and gunning down nine children, four men and three women before dawn on March 11. Bales, a 38-year-old married father of two from Lake Tapps, Washington, is currently being held at a U.S. military prison in Fort Leavenworth, Kansas.

The shootings have further strained ties between the U.S. government and President Hamid Karzai who has accused the U.S. military of not cooperating with a delegation he appointed to investigate the killings in Panjwai district of Kandahar province. The Afghan investigative team also is not convinced that one soldier could have single-handedly left his base, walked to two villages, shot and killed 16 civilians and set fire to some of their bodies.

Syed Mohammad Azeen, a tribal elder from Balandi village, said Sunday in Kandahar that he and other villagers believe more than a dozen soldiers were involved. Other villagers said they saw 16 to 20 U.S. troops in the villages. It’s unclear whether the soldiers the villagers saw were part of a search party that left to look for Bales, who was reported missing.

Allegations that 16 to 20 people were involved in the killings are “completely false,” according to a U.S. official familiar with the case, who spoke on condition of anonymity to discuss the investigation.

In an attempt to prove there was only one perpetrator involved in the shootings, the U.S. military has shown Afghan officials footage from a surveillance video that shows a soldier walking up to the base, laying down his weapon and raising his arms in surrender.

Karzai said Friday that the video, shot by an aerial blimp above the base, was “not convincing” and accused the U.S. of not aiding Afghan investigators.

The legal expert, who also spoke on condition of anonymity to discuss the case, insisted that there had been good cooperation between U.S. and Afghan investigative teams and that Afghan officials had provided important evidence for the case.

The military denied the Afghan team's request to interview Bales because that would have violated his rights as an accused in the case.

The expert also said that U.S. officials were discussing the best way to compensate the relatives of the victims and those wounded.

Military officials have said that there were no operations being conducted in the immediate area around the time of the pre-dawn killings. Helicopter noises that villagers heard could have been Medevac choppers called in to evacuate five Afghan civilians injured in the shootings, the official said.

The legal expert said charges were still being decided and that the location for any trial had not yet been determined. If the suspect is brought to trial, it is possible that Afghan witnesses and victims would be flown to the United States to participate, he said.

He declined to disclose details about the investigation, which is being conducted by the Army Criminal Investigation Division.

Army Brig. Gen. Lewis Boone, director of public affairs for the U.S.-led coalition and American forces in Afghanistan, called the shooting spree a “terrible and horrendous act,” but said the U.S. military could not jeopardize the case by disclosing details of the investigation.

“I cannot over emphasize enough how important it is in the U.S. judicial system that the facts of the case, the evidence and the circumstances are safeguarded to ensure proper judicial process,” Boone said. “Whether you are an Afghan or an American, I think you’ll agree that the most important thing at the end of the day is that justice be done.”

In Washington, Afghanistan's ambassador to the United States said Sunday that he believes the alleged shooter will be brought to justice.

But Eklil Hakimi indicated that relations between the two nations have been frayed by the shootings and violent protests across Afghanistan that broke out after Qurans were burned at a U.S. military base. The two nations also are engaged in tense negotiations on a strategic partnership agreement that will govern the U.S. footprint in the country after most combat forces pull out by the end of 2014.

The ambassador told CNN's “State of the Union” that Afghanistan was working to define its relationship with the U.S. for the years to come, but acknowledged that “down the road, it's a bumpy road.”