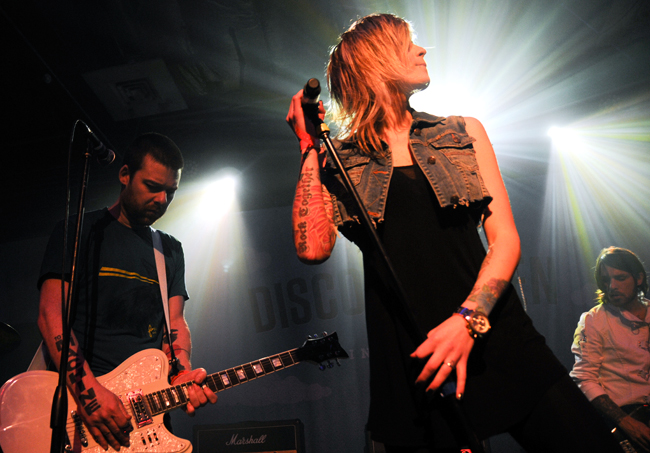 Shiny Toy Guns perform at Antones as part of the Discovery Den showcase hosted by the internet radio station Pandora. The performance was delayed over an hour due to a power outage.

From Matthew McConaughey's cameo on the bongos at Auditorium Shores, to the “21 Jump Street” premiere, to rapper 50 Cent's performance with his mentor and fellow rapper Eminem, 2012 was South By Southwest's biggest year yet.

INTERACTIVE: Though the lines of technology enthusiasts waiting for panels featuring the latest developments in social media may not have been comprised of screaming fans like those in line for the festival's music and film events, SXSW Interactive delivered an array of thought-provoking speakers hoping to encourage innovation.

Unfortunately, no major apps were launched at the appropriately nicknamed “summer camp for geeks;” however, Instagram co-founder Kevin Systrom teased the app's unreleased and highly anticipated Android version. Systrom told the crowd at his panel that Instagram's Android app is in some ways better than the original app, which is currently only available on the iPhone.

“It's one of the most amazing Android apps you'll ever see,” Systrom said.

The Interactive portion also hosted panels by actor Rainn Wilson, the masterminds behind Hulu and Funny or Die, and editors from Lucky Magazine, The New Yorker and The New York Times.

Equally impressive were the handful of open bar lounges sponsored by the biggest names in music that aren't artists, but instead music services like Spotify, PureVolume and Pandora.

SXSW staple The Fader Fort collaborated with Converse and Fuse TV for its first year as an official SXSW party that featured performances by Santigold and Kendrick Lamar and a musician-friendly menu of free beer, whiskey and pizza.

Surprise guest performances pervaded this year's music portion, as Kanye West stepped out on stage during the 2 Chainz performance, while Eminem followed suit at 50 Cent's concert, and Kenny Rogers joined Lionel Richie at his Billboard showcase.

FILM: A screaming crowd held up their cell phones at the premiere of “21 Jump Street” hoping to snap an unobstructed photo of actors Jonah Hill and Channing Tatum. Though the red carpet was fairly shorter than that of an LA movie premiere, SXSW's film portion brought Austin a taste of the Hollywood limelight.

The film festival wrapped up with the premiere of “Big Easy Express,” a documentary about the train tour of bands Mumford and Sons, Edward Sharpe and the Magnetic Zeros and Old Crow Medicine Show. Every member of the three bands showed up for a Q&A and acoustic performance after the screening.