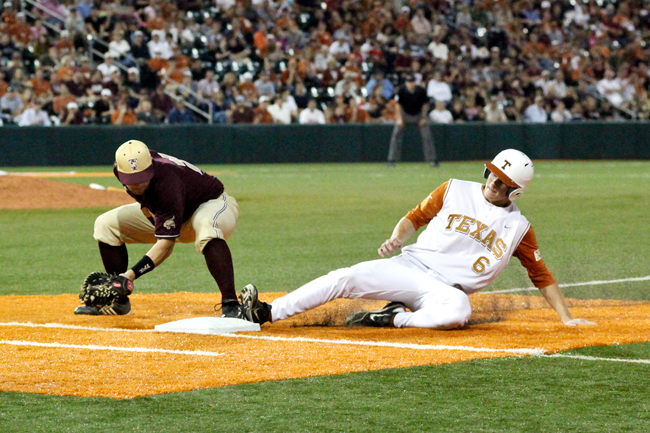 Sophomore third baseman Erich Weiss slides safely back into first base during Texas 6-1 win over Texas State last Tuesday. Weiss, a .348 hitter last season, went 7-for-15 in last weekends three-game sweep of the Sooners, raising his batting average this year from .259 to .304.

Head Coach Augie Garrido was unsure of whether his team could play well away from home, especially in a place like Norman, Okla., home of the Oklahoma Sooners, his Longhorns’ first Big 12 foe of the year.

“I think after tonight we can hope [that we’re ready],” Garrido said after a 6-1 win over No. 20 Texas State last Tuesday.

“Whether we’ll be able to go from the coziness of where we scrimmage and take it to a different environment remains to be seen.”

After Texas swept Oklahoma this past weekend and pounded out 45 hits in three games against the Sooners, Garrido should have his answer — a resounding “yes”.

The Longhorns struggled at the plate before last week, scoring only 30 runs in the 12 games before their victory over the Bobcats, who boasted the nation’s best ERA coming into their game against Texas. But thanks to an offensive explosion — scoring 23 runs and batting .360 as a team ­— the Longhorns (10-8, 3-0) were able to win their 14th straight series against the Sooners and sweep OU for the seventh time since that streak began. Now they set their sights on a home game against Stephen F. Austin (7-12, 2-4) Tuesday at 6 p.m. at UFCU Disch-Falk as Texas attempts to extend its winning streak to six games.

There were several players that stood out last weekend, starting with senior shortstop Jordan Etier, who was suspended for the first four games of the season, missed Texas’ fifth game while suffering from food poisoning and getting only one hit in 16 at-bats over the next six. But Etier bounced back with a 2-for-4 showing in a win over Dallas Baptist, picking up base hits from each batter’s box. Then, the former Westlake High School standout went 5-for-8 with a triple in the first two games of the series against Oklahoma, raising his batting average from .154 to .265 in the process.

Sophomore third baseman Erich Weiss, the team’s leading batter last year when he hit .348 and drove in 28 runs, also struggled early on this season. Weiss went 5-for-28 (.179) in the Longhorns’ first eight games of the year, but has since raised his batting average above .300 and recorded a base hit in all but two of his last 10 games, turning in multi-hit performances in six of them. The Brenham product batted .467 against Oklahoma and had three of his seven hits go for extra bases, including his first home run of the year in the series opener.

“What can happen — and we don’t know whether it will or not — is that he can decide that he has to do too much,” said Garrido of Weiss before the season began. “If he does that, then he’ll have a down year. If he comes out and just keeps baseball simple and continues to have fun with it, which is kind of his personality, he’ll be fine.”

Unlike Etier and Weiss, sophomore right fielder Mark Payton was white-hot at the beginning of the season, getting base hits in seven of his first 13 at-bats before batting .191 in his next 11 contests. But Payton got back on track last weekend, picking up as many hits in three games against the Sooners as he did in his previous 47 at-bats (nine). At .329, Payton currently stands as the Longhorns’ leading hitter.

If Texas hits as well as it did against Oklahoma the rest of the season, the Longhorns — who seem far from the team that lost five consecutive contests — will be tough to beat.