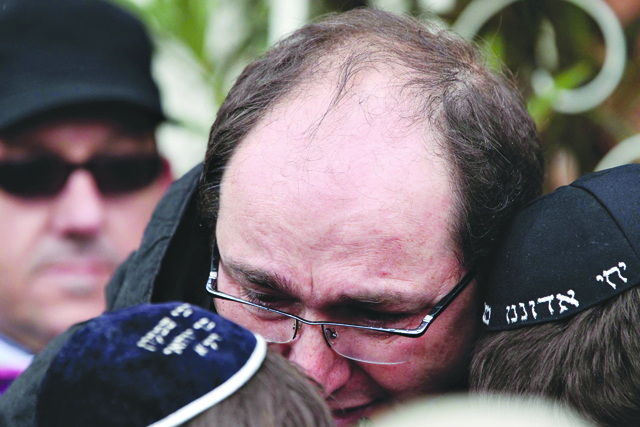 An unidentified man comforts schoolchildren as they leave their Jewish private school after a gunman opened fire killing several people in Toulouse, southwestern France, Monday, March 19, 2012. A father and his two sons were among four people who died Monday when a gunman opened fire in front of a Jewish school, the Toulouse prosecutor said Monday.

TOULOUSE, France — A motorbike assailant opened fire with two handguns Monday in front of a Jewish school in the French city of Toulouse, killing a rabbi, his two young sons and a girl. One witness described him as a man chasing small children and “looking to kill.”

One of the guns he used also had been fired in two other deadly motorbike attacks in the area that targeted paratroopers of North African and French Caribbean origin, officials said. French President Nicolas Sarkozy suggested one person was responsible for all the killings.

A massive manhunt was under way and the terrorism alert level was raised to its highest level ever across a swath of southern France surrounding Toulouse. Hundreds of officers increased security at schools, synagogues and mosques around the country, and Sarkozy said 14 riot police units “will secure the region as long as this criminal” hasn’t been caught.

France has seen a low drumroll of anti-Semitic incidents but no attack so deadly targeting Jews since the early 1980s. This country is particularly sensitive toward its Jewish community because of its World War II past of abetting Nazi occupiers in deporting Jewish citizens.

French prosecutors were studying possible terrorist links but the motive for all three attacks was unclear. Still, issues about religious minorities and race have emerged prominently in France’s presidential campaign, in which the conservative Sarkozy has taken his traditional hard line against immigration.

News that the gun was used in attacks last week around Toulouse fueled suspicions that a serial killer was targeting not only Jews, but French minorities. A police official said the same .45-caliber handgun was used in two previous attacks that killed three paratroopers and seriously injured another. In all three cases, the attacker came on a motorcycle, apparently alone, and then sped away.

Monday’s attack was as quick as it was terrifying. A 30-year-old rabbi, Jonathan Sandler, and two of his sons were killed just before classes started at the Ozar Hatorah school, a junior high and high school in a quiet neighborhood, Toulouse Prosecutor Michel Valet said. The Israeli Foreign Ministry said the sons were 4- and 5-years-old.

“He shot at everything he had in front of him, children and adults,” Valet said. “The children were chased inside the school.”Nicole Yardeni, a local Jewish official who saw security video of the attack from the single camera near the school gate, described the shooter as “determined, athletic and well-toned.” She said he wore a helmet with the visor down.

“You see a man park his motorcycle, start to shoot, enter the school grounds and chase children to catch one and shoot a bullet into her head,” Yardeni said. “It’s unbearable to watch and you can’t watch anymore after that. He was looking to kill.”

The bodies were brought in hearses to the school Monday night for an evening vigil. All of the dead had joint Israeli-French citizenship and will be buried in Israel, the Israel Foreign Ministry said.In Monday’s attack, which took place about 8 a.m., the killer also used a .35-caliber gun, the police official said. At least 15 shots were fired at the school, the official said, speaking on condition of anonymity because they were not authorized to speak publicly.

A police union official in Paris said the shooter knew weapons well to handle a .45-caliber handgun plus a second gun.

“The shooter is someone used to holding arms,” Nicolas Comte of the SGP FO police union. “He knows what he’s doing, like an ex-military guy.”

Sarkozy rushed to Toulouse to visit the school with Richard Prasquier, the president of CRIF, the umbrella group representing Jewish organizations.

“This act was odious, it cannot remain unpunished,” Sarkozy said.

“We do not know the motivations of this criminal. Of course, by attacking children and a teacher who were Jewish, the anti-Semitic motivation appears obvious. Regarding our soldiers, we can imagine that racism and murderous madness are in this case linked,” he said Monday night after returning to Paris.

Sarkozy’s challengers for the presidential vote in April and May also hurried to the scene.

The slain rabbi taught at the school and reportedly arrived from Jerusalem last September with his wife and children.

France has the largest Jewish community in Western Europe, estimated at about 500,000, as well as its largest Muslim population, about 5 million.

Toulouse, a southwestern city north of the Pyrenees mountains, has about 10,000 to 15,000 Jews in its overall population of 440,000, said Jean-Paul Amoyelle, the president of the Ozar Hatorah school network in France. He said its Jewish community is well integrated into the city.

The school targeted Monday, behind a high white wall, was cordoned off by police, who then escorted other children out as forensics police combed the scene. Six bullet holes circled an aluminum fence that surrounds the school.

One officer held a distraught girl, her face in her hands. A mother and son wearing a yarmulke walked away from the site, their faces visibly pained.

“Everything leads one to believe that these were racist and anti-Semitic acts,” Toulouse Mayor Pierre Cohen said on BFM-TV.

“This is a Jewish school, well identified as such, and it is normal to think that anti-Semitism is at cause,” CRIF said in a statement.

Interior Ministry spokesman Pierre-Henry Brandet told The Associated Press the suspect made his getaway on a dark-colored scooter — just as the assailant or assailants did in the two deadly shootings last week.

The mother of one student, Corinne Tordjeman, had just finished dropping off her 14-year-old son Alexandre when the attacker came. Alexandre described hearing the shots and parents shouting and how he saw blood all over the ground. Her younger daughter was supposed to go to a birthday party this weekend with the girl who was killed.

The killer “knew that killing Jewish children would make a lot of noise, but tomorrow it could be a Christian, a Muslim, or anyone else,” she said.

One man who lives near the school had just spoken with the rabbi.

“I said “Bonjour” to him like normal,” said the 29-year-old, asking to be identified only by his first name, Baroukh.

“Then he went out into the school entrance. I heard the shots and I turned around and saw him on the ground. He looked dead. But I didn’t have much time to see who did it because I panicked and started running away.”

Paris police said Monday they are also investigating threats against two synagogues in Paris from last week. A police official said there was no apparent link between those threats and Monday’s shooting.

In Jerusalem, Israeli Defense Minister Ehud Barak said “whether it was a terror attack or a hate crime, the loss of life is unacceptable.”The U.S. government said it joined France in condemning this unprovoked and outrageous act of violence in the strongest possible terms.”

“Our thoughts and prayers go out to the families and friends of the victims, and we stand with a community in grief,” U.S. National Security Council spokesman Tommy Vietor said.

Special prayers were offered Monday in Paris and a minute of silence in all French schools is to be held today.