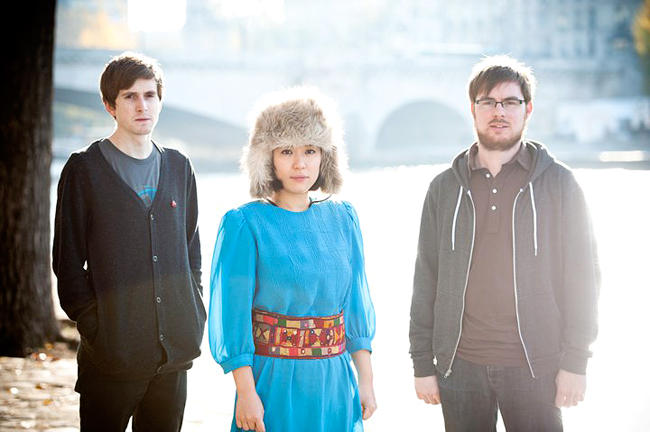 Being compared to experimental rock group Portishead would be a challenge for most; that is, unless you’re Nedry. The English three-piece courageously flourishes with a minimalist electronic atmosphere that oozes dissonance, a formula similar to their Bristol counterparts’. The band continues to explore and renovate their sound with their sophomore album, In A Dim Light, an impressive musical abyss.

What makes Nedry’s music so compelling is their use of electronics. Members Chris Amblin and Matt Parker provide droning buzz and electronic percussion that punches like a dubstep breakdown.

This is the case with the single “Violaceae,” staccato bass beats atop subtle synths ascend with a moody grace. Although vocalist Ayu Okakita’s vocal delivery is often indistinguishable, it’s her tone and the conviction behind it that is important. It acts as another instrument, adding to the unworldly vibe of the group’s music.

“Dusk Till Dawn” struts with a syncopated bass pattern and poppy electronic snare that has hipster club-banger written all over it. It has a shadowy atmosphere similar to that of indie up-and-comer Grimes,’ roaring with a half-experimental, half hip-hop groove that is undeniably infectious.

Our generation has become the electronic generation. Some of today’s biggest acts (Radiohead and Coldplay, just to name a few) have attempted to find a balance between acoustic instrumentation and computer-generated sounds. What separates Nedry from their contemporaries is their spare setup. Their laptop, guitar and vocal format create such a vibrant sphere of electronic noise that listeners will have to remind themselves that this is the work of a three-piece ensemble. The group’s less-is-more approach to instrumentation proves that it’s not the size that makes the band, but the music.

Okakita’s vocal delivery is also a crucial part of Nedry’s music. Like Portishead’s trip-hop diva Beth Gibbons, lo-fi pop princesses Claire Boucher of Grimes and Denise Nouvion of Memoryhouse, Okakita uses her voice not for the narrative, but to instill a certain feeling in the listener. “Float” is an example of this: Okakita descends chromatically on a vocal line that is chilling, preferring the art of emotional expression over storytelling.

Where the band experiences difficulty is in their buildup. At times, the introductions to songs can become redundant, leading up to a transition that doesn’t justify the long wait. This occurs in “Land Leviathan,” where the somber and soothing guitar is welcoming, but nothing ever really comes out of it.

Ultimately, In A Dim Light is anything but dim. Sure, the songs may creep in and out of a dark and moody atmosphere, but they flicker with a brightness that is sure to capture the listener’s attention.