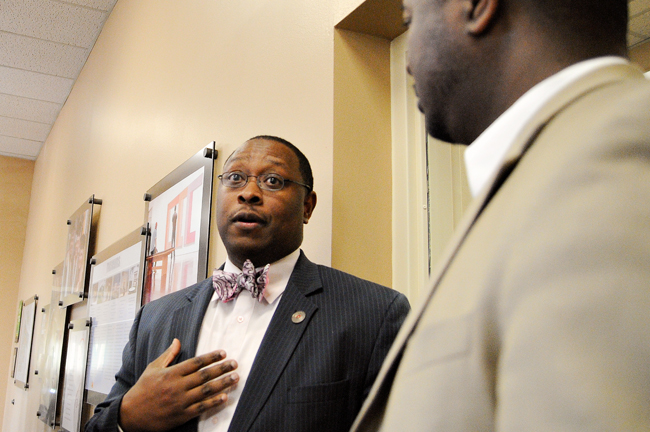 James Moore, associate provost in the Office of Diversity at the Ohio State University spoke at the Herman Sweatt Symposium Wednesday night. He discussed the possible solutions to the steady number of under performing African American males in todays society.

Ever since his childhood, James Moore said he has dealt with the stigma of inferiority associated with being an African-American male. As a result, his lifelong passion has become attempting to rise above this inequality, a burning passion which permeates his entire being, he said.

The Division of Diversity and Community Engagement hosted The 2012 Heman Sweatt Symposium on Civil Rights at John Hargis Hall to continue Sweatt’s legacy of education and excellence in African-American males. Sweatt was the first African-American male admitted to the UT School of Law, following the ruling of the landmark Supreme Court case of 1950, Sweatt v. Painter.

James Moore, associate provost in the Office of Diversity and Inclusion at Ohio State University, spoke at the 26th annual symposium yesterday, and discussed numerous solutions to the social issues currently facing African-American males. He said people are unwilling to identify underlying issues as problems because that requires taking action and fixing it.

He said adults are giving up on African-American children entirely too early. Data analysis was done on the demographics of third graders in order to see how many prisons should be built in certain areas of the country depending on the amount of African-Americans present, he said.

A big misconception inherent in our society remains that nothing is wrong within the African-American male community, Leonard Moore, associate vice president for academic diversity initiatives in the Division of Diversity and Community Engagement, said.

“Many people have already accepted the fact that black males have a harder time succeeding in higher education,” Moore said. ”By encouraging and fostering initiatives for African-American males, it’s amazing what young men can do when they have someone behind them who actually supports and stands up for them.”

Leonard Moore said in order to execute change at UT, the most influential African-American male groups across campus must be targeted, which he said were student athletes, black Greeks and successful students and leaders.

Moore said these men are not products of their environment, but products of expectations placed upon them often by people who love them. For example, once a young man skilled in football is repeatedly told he must attend college, play football and buy his family a house, he begins to associate his identity with this notion of what he does and not who he truly is, he said. Laughter filled the room when Moore said party fliers for a certain African-American fraternity repeatedly contained images of scantily clad women.

“Popularity is a double-edged sword, where one must learn how to use it in order to elevate the people, not bring them down,” he said. “Party attendance won’t be affected if those images are not used on fliers.”

Moore said if the alpha males are not dealt with, the root of the problem is ignored and nothing will change. When you deal with the most influential males, everyone else will eventually fall in line, he said.

Petroleum engineering sophomore Samantha Fuller said she attended the symposium for extra credit in her sociology class, Gender, Race and Class in America.

“I hoped to gain a deeper understanding of how males in America are affected by racism and how they differ according to their race,” she said. “We are learning about the same types of things in our sociology class.”

In order to improve the retention rates of African-American males in educational institutions, black males must be engaged in learning through things that interest them in real life and things they can relate to, Leonard Moore said.

Raising his voice, Moore said, “How can UT-Austin have one of the highest ranked education colleges in the country and yet the public schools in the same district simultaneously fall apart?”

“If Frederick Douglass can teach himself how to read, we can for sure teach our young people how to read,” he said.