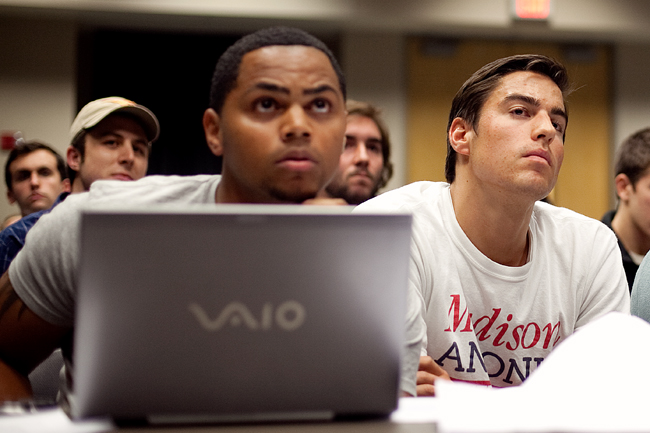 Student Government candidates Antonio Guevara and Madison Gardner face the Election Supervisory Board again after being reinstated Monday. Gardner said his campaign made an honest mistake for turning in the wrong receipt for their website and failing to note an earlier fine.

Austin Carlson, SG law school representative, brought up complaints against the candidates calling for their disqualification after UT reinstated them Monday. The Board heard the charges against Gardner and Guevara Tuesday night and charged Gardner with disqualification Wednesday night. The Board found the pair to be negligent when turning in receipts about their website, failing to acknowledge their earlier fines on their financial disclosure form and overall violating the Election Code multiple times.

The Board fined Gardner and Guevara a 10 percent fine of their campaign spending limit for turning in receipts for madisonandantonio.com instead of madisonantonio.com, the latter of which they currently use. The Board also counted this as falsification of a financial document. On Feb. 20, the Board charged the campaign a 10 percent fine of their total campaign budget for failing to list the wood they used for promotional reasons at fair market value, which they did not include in their new financial disclosure Monday.

In addition, the Board charged Gardner and Guevara to be in violation of early campaigning rules for taking a group picture in January for their promotional materials. They also fined Gardner a 5 percent campaign expense fine for failing to expense a free T-shirt he received at an event, writing his and Guevara’s name on it and posting it on Twitter.

Gardner said Tuesday he and Guevara made honest mistakes by turning in the wrong receipt and failing to note the Board’s previous fine on their financial statement. He said he hoped the Board takes all the facts into account when making a decision.

Gardner refused to comment on the Board’s second disqualification of him and Guevara.

Board chair Eric Nimmer said although Gardner and Guevara fought hard to get back on the ballot, it is irrelevant to Election Code law and the disqualification was by the book. “We never want to disqualify anyone, despite what this election shows,” Nimmer said. “We analyze the rules as we see them and the complaints as they are handed in front of us.”

“The Election Code was not ever written to be legally perfect, because there are no legal scholars that write it,” Nimmer said. “It was written to regulate a student organization [Student Government] that wanted to stop certain behaviors.”

Carlson said he supports the Board’s decision and thinks it was fair. Carlson said he does not care about their previous disqualification, only the current violations at hand. He said there were many violations of the Election Code and at the hearing the candidates admitted to failure to turn in appropriate Web receipts and disregarding the Board fine on their financial disclosure.

“The Election Code was voted on by the candidate that was disqualified,” Carlson said. “Now Student Government will actually follow its Election Code. I think that is the precedent that will follow from here.”

He said Gardner should appeal the decision if he believes it to be unjust, but he agrees with the Board’s decision.

Janette Martinez, SG liberal arts representative, said she supports Gardner as an individual student not on behalf of SG. She said she was shocked when she heard about the second disqualification. She said she does not know if the SG Judicial Court will hear an appeal if the candidates file one because the court only hears cases if they believe they was a parliamentary error done by the Election Supervisory Board.

“I don’t think anyone knew they were going to be reinstated Monday and we were all very excited,” Martinez said. “But there was definitely a likelihood of error happening [in such a quick turnaround] and I hope if there are grounds for appeal they can get an appeal, turn in what they were supposed to turn in. They’re human, they made a mistake.”

View the complete Election Supervisory Board opinion below: